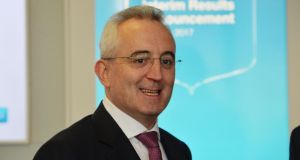 Andrew Keating, who is stepping down as chief financial officer at Bank of Ireland. Photograph: Alan Betson

Andrew Keating, the chief financial officer of Bank of Ireland, is leaving the bank for a finance job in another sector, with the bank complaining that State-enforced pay caps are “hampering” its efforts to keep senior staff.

Mr Keating, who has been with the bank in various capacities for 15 years and is also a director of the group, is expected to depart by the end of the year, it said.

Bank of Ireland said he would be “taking up a senior finance role in an international organisation outside of the financial services sector”. It is believed that he is set to join an Irish-headquartered company with operations abroad.

Irish banks have repeatedly complained to the Government that the State’s €500,000 cap on banker salaries and a 89 per cent tax on bonuses, which were introduced during the financial crisis in 2009, are damaging them and have called for the restrictions to be eased.

“Bank of Ireland remains the first and only Irish bank to fully repay the Irish taxpayer in 2013,” said the bank on Tuesday night, after it emerged that Mr Keating is to quit.

“The current restrictions represent a clear competitive disadvantage, and hamper our ability to attract and retain the people we need to run and develop our business.”

Minister for Finance Paschal Donohoe commissioned a report on the issue of bankers pay from consultants Korn Ferry, and it is expected that he will bring details of their findings to Cabinet in coming weeks. It is believed that the report says the State-enforced restrictions are unsustainable.

Philip Lane, as outgoing Central Bank governor, also advised the Government in recent weeks that it should consider easing elements of its restrictions.

Any move by Ministers to end the restrictions, however, would be likely to attract significant political controversy, especially with a minority Fine Gael-led Government reliant on Fianna Fáil to stay in power.

The Government has the power to ease the salary cap, but the punitive bonus tax was passed by an act of the Oireachtas and can be unwound only with a similar Dáil majority for change.

Francesca McDonagh, chief executive of Bank of Ireland, on Tuesday night paid tribute to Mr Keating: “I wish to acknowledge Andrew’s strong support to me in my role . . . and wish him every success in the next phase of his career.”

Patrick Kennedy, the bank’s chairman, said he was “a key member” of the board and management team.