Government must decide for itself on easing banker pay limits, forum hears 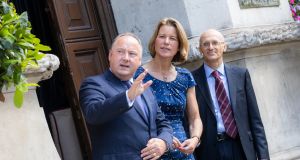 Banks are paying bonuses that are too focused on cash instead of shares, against EU rules, the European Central Bank’s head of banking supervision told a conference in Dublin on Thursday.

Andrea Enria also said that it was up to the Government to decide “when legacy issues are sufficiently dealt with” to consider easing pay restrictions and a bonus ban across bailed-out banks, given how it had to “intervene massively” to rescue the sector.

His comments come as Minister for Finance Paschal Donohoe has started to consider a Government-commissioned report into remuneration from consultants Korn Ferry, which is said to advocate a loosening of remuneration limits stretching a decade.

The EU introduced rules in 2014 that cap bank bonuses and require that at least half of variable pay in banks be comprised of “non-cash instruments”. There are also rules on the deferred vesting of bonus shares and how compensation can be clawed back in the event of wrongdoing.

However, Mr Enria said that “quite a few banks still fall short of our expectations” in their executive incentive schemes.

“Bonuses are, for example, still paid out mostly in cash instead of stocks or other financial instruments,” he said.

“Thus, compensation is decoupled from the sustainability of the bank. This fosters a short-term view, where today’s profits take precedence over tomorrow’s stock price and ability to pay creditors.”

He said that one of the things that has surprised him the most since taking on the role is the poor-quality data and IT infrastructure many banks in the euro zone continue to have, which affects the ability of lenders’ boards to make good decisions.

Mr Enria said that while the industry has made some progress in recent years in improving its culture, having in the past resorted to the few-bad-apples excuse for a series of scandals, including the manipulation of Libor, a rate at which banks lend to each other, and various mis-selling and overcharging debacles.

The €1 billion-plus tracker mortgage scandal, where borrowers were either denied their right to a loan linked to the ECB’s main rate or put on the wrong rate entirely, has dominated in the Republic in recent years.

“I realise that the European banking industry now faces a steep challenge to recover profitability from very unsatisfactory levels; but it would be a mistake to focus solely on quantitative profit targets, at the expense of integrity, customers’ interests and the long-term viability of the institution,” he said.