Ban on bank bonuses works against hunt for Brexodus jobs 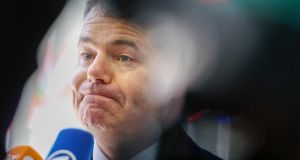 Minister for Finance Paschal Donohoe has to deal with the thorny subject of bankers’ bonuses.

As Patrick Honohan wrapped up the list of people he needed to thank at the launch this week of his new almost 400-page read on the origins of the financial crisis, the former Central Bank governor remembered a group that couldn’t make it.

“Oh yes, the bankers,” he said, to guffaws from the room of economists, central bankers, politicians and journalists. “Without the bankers, there would have been no material.”

A decade after taxpayers were forced to pump €64 billion into the State’s banks to keep them afloat after years of reckless lending, public trust in the industry is, if anything, lower than ever, thanks to the €1 billion-plus tracker mortgage scandal.

It was understandable, then, that Minister for Finance Paschal Donohoe moved quickly to lance the political boil when AIB – which, lest we forget, required a €20.8 billion bailout – came out with a plan early last year to introduce a share bonus scheme for top managers.

Donohoe used the State’s 71 per cent stake in AIB to kill the resolution at the bank’s 2018 annual general meeting. He kicked the issue to touch by bringing in consultants – executive search firm Korn Ferry – to consider the thorny issue of bankers’ remuneration.

That report has now landed, with Donohoe saying on Tuesday that he plans to bring it to Cabinet in the coming weeks. It is said to recommend that pay restrictions – comprising a €500,000 salary cap for chief executives and effective ban on bonuses – should be eased. Currently, any bonuses paid would be subject to a prohibitive 89 per cent tax rate.

Further political cover for Donohoe has come from the Central Bank. Outgoing governor Philip Lane said in a latter on May 30th to the Minister, just before departing for the European Central Bank (ECB), that there was a case for the reintroduction of “variable pay” (bonuses) as banks are struggling to hold on to staff amid competition from companies that are not subject to the same restrictions.

The European Banking Authority’s latest report on high earners in the sector across the European Union shows that 28 executives in Ireland received more than €1 million in 2017. The average pot among these was €1.82 million, 60 per cent of which was made up of variable pay.

None worked for the three surviving bailed-out Irish banks. Most came from international financial services firms that the State has courted for more than three decades. The Government’s charm offensive has been dialled up significantly since UK voters decided three years ago to quit the EU.

Some of the 3,567 high earners in the UK will have moved to Ireland since then, as a raft of banks, insurers and asset managers have set up EU hubs in Dublin. The Government and IDA are hoping more will follow over as financial activities continue to leak out of London over the coming years.

For the moment, however, staffing pressure is below the executive suites, in areas such as risk, compliance, legal and anti-money laundering. These were second-class roles in the boom days when swashbuckling commercial property lenders ruled across the domestic banks. But they are must-fill positions in even the smallest firms being authorised in Ireland amid Brexodus.

Information technology staff are in even shorter supply. Domestic banks are competing in this space not only with foreign-owned lenders but also with US tech giants such as Facebook and Google that have cornered off whole neighbourhoods in Dublin. These all offer generous stock bonus plans.

The Government’s policy on foreign direct investment is effectively undermining taxpayer-owned banks as crude pay restrictions remain in place. The Government still has to recover about a third of the €29 billion that was injected into AIB, Bank of Ireland and Permanent TSB during the crisis.

It’s hard to argue that any chief executive in what should be boring Irish retail banks deserves a basic salary in excess of the current €500,000 cap. But major investors in public companies like to see management’s interests aligned with theirs. Stock-based bonus plans do that.

The EU has clamped down on the unchecked bonus culture that fuelled the credit bubble by introducing rules in 2014 requiring that cash make up not more than half of variable pay in banks. There are also rules on the deferred vesting of bonus shares and how compensation can be clawed back in the event of wrongdoing.

While the euro zone’s top banking regulator, Andrea Enria of the ECB, said at an event in Dublin on Thursday that many banks across the currency region are defying the rules by paying out bonuses mainly in cash, the abortive AIB scheme was 100 per cent share based. The share awards would only have started converting into stock three to five years after being granted.

But just as banks grapple with commercial realities, Donohoe must deal with political ones. There is little chance of the current minority government – facing a possible general election early next year – running with a banker bonus plan.

It’s also difficult to argue that bonuses should be reinstated when a line hasn’t yet been drawn under the tracker mortgage debacle.

A compromise could involve a reintroduction of performance-related pay around the same time that new executive accountability rules, which will make it easier for the Central Bank to fine and disqualify senior bankers for failings under their watch, are expected to come into force next year.

Bonus plans can be tied to all kinds of metrics, including the recovery of bailout cash, measures around culture and how banks treat their customers.

But incentive plans in the sector can never be allowed to return to boom-era largesse. Not when the last crisis clearly established that the State is willing to step forward as guarantor of the system.