Ireland needs to take a gamble now on wave energy

With Government investment, there could be huge benefits within a few years 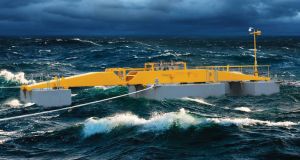 The jagged, splintered Irish western coastline is the geological result of the unrelenting pounding it has taken from powerful waves over millions of years. If this power could be captured, and converted into electricity – at the right price – Ireland would have more than enough clean energy to satisfy its power needs.

Ireland has one of the highest resources of wave energy on the planet. The Government’s Offshore Renewable Energy Development Plan estimates there is the potential to develop more than 12.5 gigawatts of wave energy capacity off the Irish coast, which is more than twice the peak electricity demand.

“We have one of the highest resources – average wave energy available to extract on the planet,” says Cian Murtagh, director of Sea Power Ltd, a small Irish company working to commercialise a wave energy converter. “The resource is located close to shoreline, with the possibility of exporting power to Europe. ”

The capture of wave energy off the Irish west coast presents significant engineering challenges. There are a great variety of wave energy capture devices with some floating on the surface and others on the sea bed, but they all must be robust enough to survive the action of 20m waves in winter.

Added to that, waves motion is more difficult to harness than, say, wind. Unlike wind, which blows in one direction, the motion inside a wave is up and down and backwards and forwards. The challenge for engineers is to “rectify” this wave action so that it moves in one direction to enable electricity to be generated.

Then there are the economic factors. The levelised cost of electricity is the price that must be achieved for energy developers to at least break even, explains John Ringwood, professor of electronic engineering at Maynooth University. The cost of producing wave energy, right now, he says, is too high.

There is an opportunity, however, to develop wave energy by producing wave-generated electricity for remote island communities who already pay a premium for their electricity, says Ringwood, who is part of an EU project aiming to bring renewable energy to a network of European islands, including the Aran Islands.

The development of wave energy for island communities offers a pathway for wave to develop in Ireland, but it won’t be enough on its own, says Ringwood. “If Ireland is serious about wave, there needs to be be serious investment from the public purse – it will need hundreds of millions in investment per annum.

“In the early 1970s Denmark made a political decision to invest in wind technology,” explains Ringwood. “It was a nascent technology, like wave is at now. It was a gamble, but it has paid off big time. Something like 50 per cent of the wind technology in the world is Danish. We could develop wave technology here and sell it, and also have enough wave energy to satisfy our entire energy demand.

“In Ireland we are risk averse compared to Denmark,” says Ringwood. “The idea seems to be be that we wait until wave technology is developed and then buy it. This will miss the opportunity we have to export wave technology to the rest of the world. Instead we’ll wait, pay top dollar for the technology and import it.”

If Ireland took a gamble now on wave, as Denmark did with wind in the 1970s, it could also compliment other renewable energy forms we are developing, says Ringwood, and provide greater energy self sufficiency, security and reliability.

The first step for aspiring wave energy developers is to test their prototype at a small scale. The Lir National Ocean Testing Facility at Ringaskiddy is the primary testing facility for offshore wind, tidal and wave energy devices. Here, developers can test wave devices on a small scale in tanks to determine whether it performs as expected, and whether it is capable of surviving storm waves.

The next step up from Lir is to test the device in the open sea. Ireland is fortunate to have a natural laboratory to do this in Galway Bay. The bay is buffered from the open Atlantic by the presence of the Aran Islands, but there is still enough wave energy to ensure a realistic sea testing regime.

Smartbay is a not-for-profit offshore testing site which was set up in Galway Bay by the Marine Institute in 2012. Devices can be tested on a bigger scale here than at Lir, up to half scale, in conditions close to those on the open sea.

“Deployment at Smartbay will cost €1.5 to €2 million,” says its general manager John Breslin. “If you build a full scale device it can cost tens of millions. At Smartbay developers can build at a small scale, get it right and then scale up.”

Wave developers believe there are a number of impediments that are blocking the way to developing wave power in Ireland. They point to difficulties obtaining a foreshore licence to test their devices in the sea, with a number of government agencies involved in a process which can often take years.

“The whole foreshore licence thing is sad that it has gone on so long,” says Ringwood. “There are several government agencies involved in it, but there is no will... Developers can’t get their devices into the water.”

Developers also highlight difficulties with funding, particularly the cost of testing devices in the lab and at sea. “Access to funds must be made a priority and asking developers to pay up front is a complete roadblock,” says Dr Patrick Walsh, chief executive of Limerick Wave, a small wave energy conversion company.

Ireland should look to Scotland, wave developers suggest. The Scots set up Wave Energy Scotland (WES) in 2015 to develop wave energy there, and the sector there has been thriving as a result. “They [WES] give high percentage support levels in a stage gate format,” says Murtagh.

“Ireland should appreciate the high cost of running pilot demo projects for this industry, and fund a direct route for testing these technologies into our national test site – Smartbay.”

Meanwhile, the Sustainable Energy Authority of Ireland accepts their funding mechanisms for wind developers are “no longer suitable” in their current state and they say they are are now reviewing the schemes and supports they offer.

The big freeze of 2010, when there was a high pressure weather front over Ireland for two weeks, and the wind didn’t blow, provides one example of why wave energy is needed here. “There was not a windmill turning in the country, and the electricity demand went through the roof,” says Ringwood. “Where is your electricity coming from then? You need a mixture of technologies.”

The need for action on climate is a minor push factor behind wave, but a more significant push for wave developments could be the closure of the Moneypoint coal-fired electricity generating plant. The plant is set for closure in the next two years, and when it does, the days of cheap and dirty electricity will be over.

Post Moneypoint, the increased costs of electricity might finally open the door for the flourishing of a wave sector which has struggled without enough funding and support, while electricity was cheap and production costs remained high.

“No country, or company has cracked the challenge of developing technology that can harness wave energy reliability and at a reasonable cost to the end user,” says Ray Alcorn, secretary of the Marine Renewables Industry Association and chief executive of Exceedence, a renewable energy start-up. “However, given the growing awareness around climate change, and the fact that 40 per cent of the world’s population lives within 60 miles from the sea, the prize is huge.”