Gardeners, give up buying peat compost – it’s a disaster for the environment

One Change: By far the best, and cheapest, solution is to invest in a home composting bin 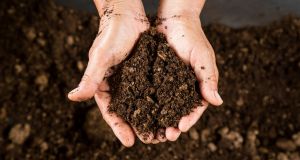 Every gardener should stop buying potting compost, or any type of peat-moss product. Photograph: iStock

The One Change that every gardener should implement immediately is to give up buying potting compost, or any type of peat-moss product. Europe’s vast swathes of ancient peatland have been decimated to such an extent that Ireland now possesses 50 per cent of all the intact oceanic, raised bog systems left on the continent.

It is of enormous importance ecologically, with a whole range of endemic plant and insect species that cannot survive elsewhere, and it’s one of the most efficient forms of carbon sequestering currently known.

In their (wet) natural state, living peatlands draw down vast amounts of carbon dioxide from the atmosphere through plants, and trap it underground as carbon. Though they form only 3 per cent of the planet’s land surface, they store twice as much carbon as all standing forests. They’re the most important long-term carbon store in the terrestrial biosphere, and so the idea of mulching them up to use as soil in hanging baskets is ludicrous.

This threatens not only the atmosphere, but the ancient bog bodies and prehistoric treasures that have been preserved within them too. In 2005 a Bronze Age road made of solid oak beams was discovered in Mayne Bog in Coole, Co Westmeath during commercial peat harvesting by Westland Horticulture.

The National Monuments Service chose not to issue a preservation order, and so, for the last 13 years Westland has continued milling up the bog to sell as compost, until eventually agreeing this summer to preserve whatever remnants might remain.

The craziest element is that peat moss isn’t even a good compost. The alternative commercial composts made from the likes of bark, coir and bracken are better, but by far the best, and cheapest, solution is to invest in a home composting bin, in which all one’s uncooked vegetable waste can be dumped, alongside shredded paper, garden clippings, tea bags and myriad other items. Natural processes of decomposition will transform it into the finest garden compost within a year or two, that will bring vibrancy and life to your garden.

If you don’t have suitable space, consider a Bokashi compost system (originalorganics.ie/composting/bokashi-composting.html), in which kitchen scraps, including meat and cooked food, are fermented using natural enzymes within a small bucket that fits under the sink.

Alternatively, you can turn to companies like enrich.ie or mulch.ie which gather up garden clippings on a commercial scale and transform them into organic, peat-free compost that will nourish the soil, while also attracting earthworms to your garden. For fragile seedlings, it’s worth passing these rich composts through a sieve first, and mixing them with a peatless potting compost, like that made by Klasmaan which uses coconut pith and is available from fruithillfarm.com.

Seat’s new Leon: It’s now better than the VW Golf it’s based on
7