A third willing to eat less meat; 47% willing to plant a tree to make positive impact 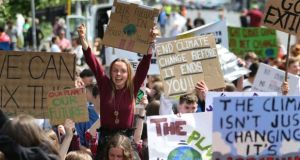 A survey on attitudes to climate change indicates a marked shift among the Irish public in recognising what they need to do to help decarbonise Ireland. File photograph: Nick Bradshaw/The Irish Times

A survey on attitudes to climate change indicates a marked shift among the Irish public in recognising what they need to do to help decarbonise Ireland.

The trend is most obvious among young people, who are most willing to switch to plant-based diets.

When it comes to making “a positive climate change”, the top change respondents are willing to make is using reusable drinking bottles, coffee cups or shopping bags (74 per cent), followed by reducing food waste (73 per cent) and unplugging electronics when not in use (69 per cent).

The survey of more than 1,000 people indicates 88 per cent of respondents believe the Earth is getting warmer as a result of climate disruption, while 86 per agree this is mostly due to human activity – among 18 to 34-year olds, the latter figure is 91 per cent.

As part of Science Week 2019, Science Foundation Ireland commissioned iReach Insights to investigate the Irish public’s understanding and awareness of climate change. This year the week is focussing on “providing accurate, scientific context to the current state of the world’s changing climate and the actions needed to mitigate this change”.

The research gathered insights into what the public are willing to do to make a positive climate impact and what they feel are the biggest impacts they can make as individuals. However, when asked about the current level of information provided on climate action, 49 per cent feel information is “confusing and unclear”.

Respondents across all demographics say they believe they can make the biggest personal impact on climate action by using energy efficient products in their home (55 per cent); using reusable drinking or shopping bags (49 per cent) and making an attempt to cycle, walk or using public transport (49 per cent).

Commenting on the findings, SFI director general Prof Mark Ferguson said the survey indicated young people were more knowledgable about climate change “and more willing to do something about it”.

While people ask what they can do as individuals to help address a massive problem, “small actions by a lot of people can make a big effect”.

Through Science Week, SFI was seeking to help people understand climate change, how science and technology can help create a positive climate future “and the impact we as individuals can have on climate change”.

“Given a significant majority of our research respondents stated they find information on climate action confusing, we hope to provide research-based information and solutions ... Reducing plastics is only one of a multitude of actions required, we need to widen the engagement with the public in relation to solutions to greenhouse [gas] emissions and climate action.”

More than 1,200 events are taking place during Science Week, which runs until November 17th – many of which are designed to bring science and climate action to the fore of the public’s minds through fun, engaging and interactive events.

To support the national effort to plant 440 million trees by 2040, SFI is partnering with Coillte which has provided 30,000 trees to be planted during the week. At tree planting events across the country the public can find out what trees do for our environment, which trees suit Irish ecosystems and how they can plant trees at home.