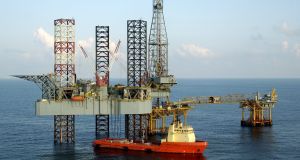 An oil platform in the Gulf of Mexico. Photograph: Chris Graythen/Getty

Wholesale energy prices fell by 4 per cent in October as oil prices drifted lower on the back of a slowdown in the global economy.

The Bord Gáis Energy index is now 31 per cent below the comparable period last year.

Oil, the largest component of the index, fell 3 per cent as the outlook for oil demand continued to deteriorate.

“Just six weeks after an attack on Saudi Arabia’s oil infrastructure pushed oil prices over $70 a barrel, prices are struggling to hold on to $60 a barrel,” the report said.

“ It would have been reasonable to expect that such an attack would drive prices higher, but a deteriorating economic outlook, exacerbated by a trade war between the world’s two largest economies, has seen oil demand forecasts revised lower,” it said.

Among the other components of the index, gas prices gained 6 per cent, supported by a strong recovery in sterling, while electricity was 7 per cent lower due to increased wind generation, and coal prices fell 9 per cent on weak demand.