US shale to swamp Opec supplies over next five years 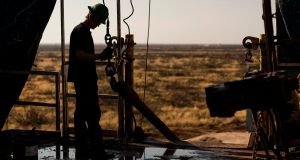 A shale drilling operation in Texas.

Opec forecasts falling demand for its crude over the next five years as US shale oil and other production from outside of the cartel continues to dominate supply growth, the exporter group said on Tuesday.

Production from outside of Opec – led by US shale oil supplies – is expected to swell to 72.2 million b/d, from 64.4 million b/d this year. This is up more than 12 per cent over the next five years.

“Non-Opec supply prospects have been revised up sharply, as US tight oil, in particular, has again outperformed expectations,” said Mohammad Barkindo, secretary-general of Opec.

The forecasts come even as bankruptcies are mounting across the US shale oil sector as investors starve drillers of capital, which is believed to threaten the rapid expansion of output in recent years.

“While there continues to be talk of more financial prudence in the tight oil patch, prospects for growth remain given that efficiency and technology gains have further increased,” said Mr Barkindo.

The new estimates come as Opec countries prepare to meet in Vienna next month to decide on oil production policy for the coming year amid a slump in crude prices that may prompt these nations to curb supplies further.

Opec and its allies agreed to reduce output by 1.2 million b/d in 2019. This deal on oil policy replaced a previous one where countries had agreed a round of production cuts beginning in January 2017.

Mr Barkindo had previously warned about an uncertain outlook for oil demand given economic weakness. Opec said consumption growth will weaken from 1.1 million b/d in 2019 to 900,000 b/d in 2024, which is still a fairly robust rate of increase.

Growing climate activism and political momentum behind a shift toward cleaner fuels has put long-term oil demand in focus. Oil consumption is expected to increase by 12 million b/d to reach 110.6 million b/d by 2040.

Opec still believes that its t oil will triumph over other supplies in the coming decades. “It is Opec that will be expected to meet the majority of oil demand requirements,” Mr Barkindo said. – Copyright The Financial Times Limited 2019