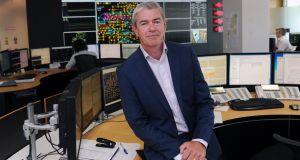 Mark Foley CEO of Eirgrid: Ireland’s transmission system operator has released its latest analysis of how Ireland’s electricity sector may evolve over the next 20 years.

Ireland’s transmission system operator EirGrid has released its latest analysis of how Ireland’s electricity sector may evolve over the next 20 years. Kevin O’Sullivan outlines how the State is preparing to meet the challenge of ensuring 70 per cent of power on the grid comes from renewables by 2030.

Staying with the energy sector, ESB is not ruling out closing two peat-burning power plants in a move that could cost hundreds of jobs at fellow State company, Bord na Móna, writes Barry O’Halloran. He reports that ESB unsuccessfully sought cash from the State to dismantle Lough Ree and West Offaly peat-fuelled electricity plants after December 31st, when they no longer qualify for a price support scheme.

Granahan McCourt, the Government’s preferred bidder for the ¤3 billion National Broadband Plan (NBP), has been confirmed as one of the lead bidders for Northern Ireland’s state-backed broadband scheme. Eoin Burke-Kennedy has the details.

Fitch Ratings, one of the global “big three” credit ratings agencies, is shifting control of much of its European operations to Ireland. Company documents filed as part of the restructuring also include detailed accounts of the tax implications of the move, writes Mark Paul.

An Bord Pleanála has cleared the way for house-builder, Cairn Homes to lodge plans to build for over 611 apartments in Donnybrook. It purchased the site from RTÉ for €107.5 million over two years ago.

Boeing’s chief executive has apologised to the families of those killed in two separate accidents involving his company’s aircraft, as he testified in front of Congress for the first time since the crashes.

In his column this week, Ciarán Hancock assesses the airport regulator’s decision to cut charges, arguing that while it might seem to be good news for consumers, it could ultimately be bad news for airport users.

In commercial property this week, Ronald Quinlan reports on how Google has entered into talks in relation to the rental of the Sorting Office, the seven-storey office block being developed in the Dublin docklands. Should a deal be agreed, it would provide Google with enough room to grow its Dublin-based workforce by up to 2,000 employees.

Ronald also has news on the developers of the site of the former Nassau House building at the junction of Dawson Street and Nassau Street, immediately across from Trinity College Dublin, who have secured a loan of over €100 million to finance the development.