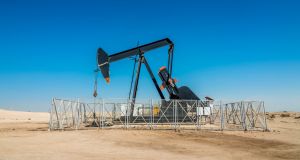 Opec’s crude production held steady in December as the group approached a fresh year of output curbs in full compliance with its supply deal.

The 14 members of the Organization of Petroleum Exporting Countries pumped 32.47 million barrels a day, according to a Bloomberg News survey of analysts, oil companies and ship-tracking data.

Libya saw a 30,000-barrel-a-day decline to 970,000 a day following a pipeline blast, which was offset by an increase from Nigeria. Both countries were exempt from cuts last year but are now expected to join the effort with a combined limit of 2.8 million barrels a day. Opec and its allies agreed November 30th to extend their output agreement until the end of 2018 to balance the market.

The 12 Opec members bound by output caps implemented 121 per cent of their pledged cuts in December, the same as the prior month, the survey showed. - Bloomberg