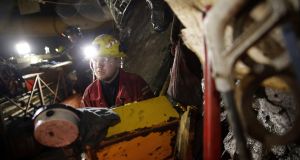 A mine worker operates an underground diamond drill rig inside the Curraghinalt gold project near Omagh. Photograph: Matthew Lloyd/Bloomberg via Getty

An Australian exploration company has become the latest listed prospector to join the rush to find precious metals and diamonds in Northern Ireland.

Walkabout Resources, which has previously focused primarily on Africa, has expanded into the North with the acquisition of an exploration portfolio from Lonmin, a UK listed and international platinum group metal producer.

Walkabout said the acquisition gives it “immediate access to a ready-to-go” portfolio that potentially includes gold, lithium and base metals in Northern Ireland.

The company, which is listed on the Australian Stock Exchange, is currently seeking to raise $10.1 million Australian dollars. It’s chiefly to finance development and exploration projects in Africa but “reconnaissance and follow-up work in Northern Ireland on existing licences and studies in selecting and acquiring further prospective exploration sites” has also been signalled to shareholders.

Part of its newly acquired portfolio in the North is a 50 per cent interest in an active gold joint venture with the UK-based gold-mining company Koza in the Dalradian Gold Belt.

According to Trevor Benson, chairman of Walkabout Resources, Northern Ireland “is an exciting mineral exploration destination with a stable government” and has a “well-established mining code that governs the extractive sector in the region”.

He is not alone, as the number of companies currently vying to get their hands on some of Northern Ireland’s most precious natural resources attests. Many of the suspected gold and silver deposits, are owned by the Crown estate, which means any “royalties” from precious metals extracted go straight to the Crown estate purse.

The Department of Economy last month granted a prospecting licence to Dublin-based Karelian Diamond Resources over an area in Tyrone and Fermanagh. Karelian is the second Dublin-listed prospector to venture North: Conroy Gold currently holds a licence to dig at Clay Lake in Armagh.

It already operates an open pit gold mine near Omagh in Tyrone and secured permission earlier this year to continue to mine underground. It recently raised £682,859 in a private placing to fund that project.

Another Canadian explorer, Dalriadan, has recently closed a $78.25 million Canadian dollars private placing that will, in part, support its plans to develop an operating gold mine at Curraghinalt, between Rouskey and Greencastle, also in Tyrone.

Last month Dalradian, also listed in Toronto and London AIM, sought planning for an underground mine that it believes can “deliver a sensitively designed and well-thought-out project that will provide economic benefits to the region and solid returns to our shareholders using environmental best practice”.

But community groups and environmental organisations do not agree.

The Save Our Sperrins (SOS) group, based in the heart of Tyrone, and the Greencastle Community Voices and Communities Against Mining intend to lodge a formal complaint against the application, which will probably be the subject of a local inquiry.

SOS says communities in Tyrone fear that harmful toxins could be used and created in the processing systems and waste from the proposed mine, which could in turn pollute water and air.

Local politicians from across the spectrum have expressed their concern about the number of licences granted recently and the potential impact mining operations could have, not just on their immediate environment and communities but also on the North’s tourism and the agriculture-dependent industries.

At its recent ardfheis, Sinn Féin voiced its support for the SOS campaign and vowed to “undertake to review and amend in government the current mining licence system to ensure the public interest”.

Tanya Jones, deputy leader of the Green Party in Northern Ireland, has also warned that the mining licences are being granted “by the back door” because there is no Executive in place.

According to James Orr, director of Friends of the Earth Northern Ireland, the growing number of new licences being issued to companies who “want to extract wealth from Northern Ireland” is an alarming trend.

“We also need to examine exactly where these companies are locating, because we are concerned there could be a Brexit factor here. There are very obvious threats. We might not be just looking at a soft or hard border for Northern Ireland but also potentially a dirty border,” Mr Orr said.