Gaelectric shareholders to get more than expected from asset sales

Green energy developer has been placed into liquidation, allowing asset proceeds to be distributed 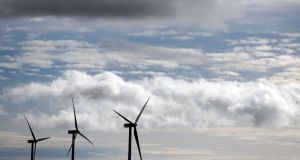 Shareholders in green energy developer Gaelectric are to receive more money than initially expected from the winding down of the company.

A decision to put Gaelectric in voluntary liquidation was agreed by backers last Thursday, allowing the distribution of asset sales to 60 shareholders, including Slaney Meats owner Bert Allen.

The value of the proceeds to be returned to investors from asset sales has been revised as of last week from €5 million to €16 million. This is due to a number of factors, including better-than expected sales prices for divested assets, the writing off of loans owed by Gaelectric to co-founder and former chief executive Eamonn McGrath and another former CEO Barry Gavin. The two former company bosses also agreed to hand over a significant portion of their equity in the business so as to help lower losses for investors.

Gaelectric was put up for sale in October last year after a potential deal by China General Nuclear European Energy to purchase a 50 per cent stake in the company failed to materialise.

The fast-growing company had invested significant sums in developing wind farms in previous years, with much of the financing for these coming from borrowed money.

The company, which was founded in 2004, was once seen as a possible €400 million stock market flotation candidate. However, Mr McGrath found himself in court earlier this year after US private equity group Lone Star, which had an 8 per cent stake in the company, initiated High Court proceedings against him amid claims that the entire share capital of Gaelectric was between nil and €5million.

Accountancy firm KPMG has over the last year run a sale of the company’s assets, which included two operating wind farms with the capacity to produce 18 mega watts (MW) of electricity, enough to power about 10,000 homes.

There was a further group of windfarms at various stages of planning that would generate 60MW of electricity once completed, as well as solar power plants at various points of development that could produce 80 MW of electricity. In addition, the company had an asset management business and an electricity trading arm.

Among the beneficiaries of the sell-off was Element Power, which secured a major offshore wind site in the north Irish Sea from Gaelectric in April.

The majority of Gaelectric’s board resigned last October following the decision to wind up the company.

Michael O’Sullivan and Shane Doherty, who were both asked to join the board to help manage the structured solvent wind down, resigned late last week following the vote to put Gaelectric into voluntary liquidation.

Following that vote liquidator Brian O Neill has been appointed to manage what is now seen as largely being an administrative process.

1 Stripe lures Dhivya Suryadevara from General Motors to be CFO
2 Revolut losses tripled before Covid-19, despite rise in users
3 Revised help-to-buy scheme opens for applications
4 ‘No demand... because there are no people’ at well-known Dublin pub
5 Nearly 30,000 could lose pandemic payment if they do not confirm eligibility
6 Transferring the family farm without a tax headache
7 Divorce: What will it cost and can you afford it?
8 CityJet exits examinership after High Court ruling
9 Apple received $250bn dividend from Irish subsidiary in 2019
10 Debenhams cuts 2,500 UK jobs in latest blow to retail sector
Real news has value SUBSCRIBE