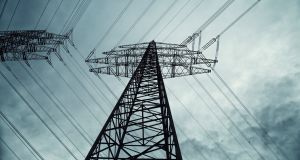 Northern Ireland’s power plants may have sufficient capacity to supply the region, albeit at higher prices than now.

Homes and businesses in the North face possible 30 per cent-plus electricity price rises should the UK crash out of the EU without a deal.

The North is part of the all-Ireland single electricity market and its power grid is run by System Operator Northern Ireland (Soni)m a subsidiary of the Irish Government-owned Eirgrid.

Sources say that should the North split from the all-Ireland market following a hard or “no-deal” Brexit, consumers and businesses there would face price increases of up to 34 per cent.

Such an increase would be unlikely to follow a hard Brexit immediately, as the all-Ireland market would continue to function with no impact on electricity supplies or prices in Northern Ireland.

However, legislation and new regulations, backed by an agreement between the Republic, UK and Brussels, would be needed to allow this continue in the longer term, as EU rules underpin the all-Ireland market.

Should this not happen, Northern Ireland would have to rely solely on its existing power plants and a line linking it to Scotland. As many of the region’s electricity generators are ageing and expensive to run, this would push up prices.

Sources agree that British government estimates that those increases could be as much as 34 per cent are correct.

Some British papers on Thursday published details of a UK government paper suggesting that the North could suffer blackouts and energy companies there could collapse following a hard Brexit, as the single market could “collapse”.

However, figures in the Irish energy industry dismissed the British government’s assessment of the North’s electricity infrastructure.

They pointed out that Northern Ireland’s power plants have enough capacity to supply the region, albeit at higher prices than currently.

The mechanism used to set electricity prices in the all-Ireland market favours cheaper suppliers, which helps to keep overall costs down.

As a result of recent investment, most of the more efficient and cost-effective power plants are located in the Republic.

Without the benefit of their contribution, Northern Ireland’s older and more expensive plant would have a greater influence on power prices in the region.

Ireland’s electricity markets were integrated in 2007. A high-capacity line running from Louth to Tandragee, Co Armagh, is the main North-South power electricity connection. There are two smaller lines in Counties Cavan and Fermanagh and Donegal and Tyrone.

Eirgrid and Soni plan a second high-capacity line from Co Tyrone to Co Meath, but courts on both sides of the Border are reviewing the proposal. The companies intend going ahead with the interconnector despite the UK’s planned departure from the EU.

Meanwhile, electricity distributor NIE Networks has borrowed £350 million in bonds to invest in Northern Ireland’s power transmission and distribution networks. It used £175 million to repay an existing bond and will use the balance to invest in the electricity network.

Gas supplier Flogas said on Thursday that it would increase household prices by 9.8 per cent from November, adding €80 a year to the average bill, according to some calculations.