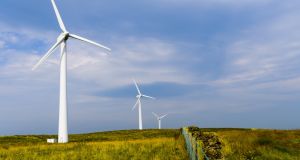 So far this year, 27.5% of Irish electricity production has come from wind energy. Photograph: iStock

The expansion of wind energy generation in Ireland over the 2000-2020 period had an associated net cost of just €1 per household a year, according to a soon-to-be-published study of the sector.

“Between 2000 and 2020, the net financial cost of wind was €100 million. This is significantly less than the total support costs under the Public Service Obligation [PSO] of €2 billion,” according to Dr Mark Turner, director of Baringa energy consultants who undertook the study.

The projections out to 2020 are based on existing wind capacity.

Dr Turner also told an Irish Wind Energy Association conference in Galway that wind energy over that period had saved 40 million tones of CO2 across the island of Ireland and €2.5 billion on gas burning to generate power.

The benefits were clear when wholesale power prices, savings on capacity payments and avoidance of EU non-compliance costs for not meeting renewable targets were factored in.

IWEA chief executive Dr David Connolly said record levels of wind energy were being delivered at scale in Ireland. So far this year, 27.5 per cent of electricity production in Ireland had come from wind energy. He expected that figure would reach 30 per cent by the end of the year.

The Republic had the cheapest PSO levy applied to electricity bills in Europe, which he said was providing “clean, green energy at minor cost to the consumer”.

He was confident the Irish wind sector could contribute to providing even cheaper electricity, and become “a low-cost energy” provider compared with fossil fuels over the next decade. “If we get this right, the opportunity for rural Ireland is monumental,” he added.

Wind energy would be the number one source of electricity in the EU by 2025, said Giles Dickson, chief executive of WindEurope (WE) which represents the EU’s wind sector in Europe. But electricity accounted for only 24 per cent of total energy consumed – with heat (45 per cent) and transport (31 per cent) making up the rest.

If Europe was going to decarbonise by 2050, he said it would require getting much more renewables into heat and transport; “electrification is the only way”.

He confirmed that WE had recently written to the UK prime minister Theresa May and European Commission president Jean-Claude Juncker to underline the crucial importance of keeping the UK energy system as closely as possible to the internal EU energy market post Brexit, and not to change the single electricity market (I-SEM) on the island of Ireland.

His understanding was there would be some disruptions to the former but there was a strong sense on both sides that they should be minimised, while the I-SEM would function as normal.

Donal Flavin of the IDA strategic policy unit said FDI companies based in the Republic wanted 100 per cent renewables and were prepared to pay a premium for guaranteed, traceable power from renewable sources, especially in relation to data centres.

Ireland had cheaper electricity than Germany, Spain and Italy but he noted it was more expensive than countries it was competing with for data centres, such as the UK, the Netherlands and Scandinavian countries.