Group calls for 70% target for renewable electricity by 2030 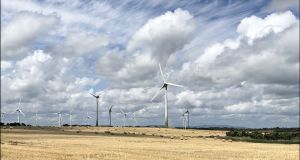 A group representing renewable energy providers is calling on the Government to aim for a target of 70 per cent of electricity generation to come from renewables by 2030.

A report from energy and utilities analysts Baringa issued on Wednesday concludes it is technically possible and cost neutral to the consumer to use renewable energy to supply 70 per cent of our electricity needs by 2030.

This would go a long way towards meeting Ireland’s share of a new EU target of 32 per cent of EU’s energy – across electricity, heat and transport – coming from renewables by 2030, it adds.

Ireland’s share of that target will be negotiated with the EU over coming months. Currently, 30 per cent of Irish electricity comes from renewables and while Ireland will fall short of its overall 2020 renewables target, it is expected to reach its 40 per cent target for electricity generation.

Irish Wind Energy Association chief executive Dr David Connolly said there was a once-in-a-generation opportunity to shape Ireland’s energy and climate action policies. “The evidence from the Baringa report is clear. An electricity system using 70 per cent renewable energy by 2030 is not only practical, it is – at a minimum – cost neutral for the consumer.”

The Baringa analysis shows a likely cost in the order of €4 billion – including market supports – and savings of a similar order including reduced transport and heat costs.

Chief executive of the Irish Solar Energy Association Michael McCarthy said that in advance of completing a draft national energy and climate plan by the end of 2018, there was “a unique opportunity” for Ireland to lead by example across the EU, while making best use of solar, wind and other renewable resources and facilitating the electrification of the heat and transport sectors. “Increasing the renewable electricity target will lead to more clean energy production, more jobs, more local investment and a better environment.”

Speaking at a briefing in Dublin, Marie Donnelly, former director for renewables and energy efficiency with the European Commission’s Directorate General for Energy, said there would be challenges arising from a 70 per cent target but Ireland had the best combination of natural energy resources within its own territory to decarbonise its economy by 2050.

Decarbonising the electricity system as soon as possible was necessary to enable electrification of heat and transports systems, and for renewables and emissions targets to be achieved, she added.

The chairman of the Climate Change Advisory Council Prof John FitzGerald said he was depressed that so little had been done in setting out a pathway for Ireland to decarbonise over coming decades. The use of renewables in electricity generation “is about the only success story we can tell” – and now was the time to build on this.

He reiterated his view that setting a carbon floor price combined with a rising carbon tax out to 2030 was needed to guarantee necessary investment. Without cross-party agreement in the Oireachtas and a rising carbon tax, “we are going absolutely nowhere”, he added.

The chairman of Smart Grid Ireland Paddy Turnbull said Ireland was already a world leader in using renewables to supply the national electricity grid and the role of grid network was critical to the achievement of this strategic goal. “There will be key benefits for the Irish economy as it will encourage innovation in renewable energy which will have long-term benefits for consumers,” he said.

– Develop at least 2,900 MW of solar power, including both small-scale installations on buildings and larger solar farms.

– Strengthen our electricity transmission system so that it can accommodate up to 90 per cent renewable electricity at any one time.

– Reduce the minimum amount of fossil fuel generation required on our system from 1,000 MW to 700 MW.

– Build an additional 1,450 MW of interconnection from Ireland to neighbouring countries.

[These steps are based on “key scenario assumptions” on an all-island basis, including having 630,000 electric vehicles, 400,000 combined heat and power systems in operation and 700MW of micro-generation by 2030.]

Divorce: What will it cost and can you afford it? 05:38
ComReg criticised for ignoring request to update pricing models 05:27
Pmask coverings likely to suit meat plant workers, founder says 05:26
Apple received $250bn dividend from Irish subsidiary in 2019 05:15
‘Humble’ Airbnb going back to basics 05:12