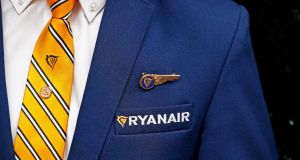 Ryanair says the European Commission must investigate rival airline crew, unions and lobby groups, which it accuses of impeding talks with staff and organising strikes to damage its business.

The airline faces strikes tomorrow in Belgium, Germany, Italy, the Netherlands, Portugal and Spain, forcing it to cancel 8 per cent of its flights, affecting about 30,000 of a total of 450,000 passengers.

Ryanair published its offers to pilots and cabin crew yesterday to correct what it called competitor trade union propaganda and said it wanted to conclude deals quickly with its staff.

The carrier confirmed it had complained to the European Commission, demanding an investigation of competitors’ crew, unions and lobby groups for interfering in talks with staff and organising strikes to damage the airline’s business for its rivals’ benefit.

Ryanair argued it had made significant progress since recognising trade unions nine months ago, reaching deals in the Republic, Germany, Italy and the UK. Nevertheless, the company said it faced industrial action where “competitor airline pilots and cabin crew are interfering in negotiations or blocking progress up to and including organising unnecessary strikes”.

Ryanair claimed that in Spain, Norwegian Air cabin crew in Alicante were organising strikes, while TAP staff were doing the same in Portugal.

Dutch pilots insisted a KLM pilot negotiated with Ryanair, the airline said, while in Sweden, unions refused to meet unless a pilot working for local carrier Braathens was present.

Ryanair chief executive Michael O’Leary, said the company was not aware of any other multinational where competitors’ employees interfered in talks.

“Volkswagen’s union negotiations do not take place with Peugeot car workers,” he argued.

However, Liz Blackshaw, campaigns director with the International Federation of Transport Workers, said it was normal for trade unions to have elected representatives working for other airlines.

She added that, as Ryanair only recently recognised trade unions, its staff had not been organised long enough to have their own representatives.

“Where unions have the resources, they have been fielding teams of people who do not work for other airlines,” she said.

Ms Blackshaw argued that Ryanair was “wasting time making complaints” when it should be trying to resolve serious industrial relations issues.

Ryanair maintained it was facing strikes over demands to which it has already agreed. These include moving workers in Belgium, Germany, the Netherlands and Spain to local contracts governed by the laws and taxes of the countries where they are based. It is also proposing a system to deal with base transfers and related issues similar to one agreed recently with Irish-based pilots.

Ms Thyssen said afterwards that, under EU rules, the place where cabin crew and pilots are based determines the laws that govern their employment, not the country where the aircraft is registered.

“Respecting EU law is not something over which workers should have to negotiate, nor is it something which can be done differently from country to country,” she said.

Mr O’Leary responded that the issue of applicable law was irrelevant in Ryanair’s case as the airline had already written to unions in Belgium – and all other EU countries – offering to implement local law, social taxes and court jurisdiction.

He added that Ryanair asked Ms Thyssen to call on Belgian union CNE to call off Friday’s strike as the carrier had already pledged to agree local contracts governed by Belgian law and regulations.

Mr O’Leary said last week that Ryanair was lobbying the Government to change tax laws to allow it to offer local contracts to pilots and cabin crew based in other European countries.

1 Objectors stall production of enough timber for 5,000 houses
2 Revised help-to-buy scheme opens for applications
3 Shed Distillery in Leitrim to open €3m visitor centre next month
4 Urban micro-farm growing vegetables in heart of community
5 UK tips into deepest recession on record after 20% contraction
6 Moving in and out of lockdown is a recipe for economic disaster
7 AIB concedes Covid mortgage policy was ‘regrettable’
8 General Motors deprived of rising star after CFO’s surprise move to Stripe
9 Glanbia sees sharp decline in earnings due to Covid-19 crisis
10 ‘No demand... because there are no people’ at well-known Dublin pub
Real news has value SUBSCRIBE