Why do we let gurus preach to us from pulpits far from scrutiny? 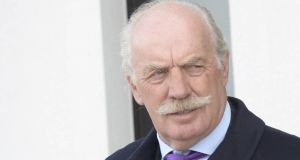 Dermot Desmond: In context of him urging an interventionist approach by the State, there has been less coverage of how his wife, with two of her neighbours, has launched a case that could scupper planning permission for thousands of new homes.

Ever since he sold out of Batimore Technologies near the top of the dotcom bubble, Dermot Desmond has been famed for his timing.

Timing is everything, of course, and housing is clearly in the spotlight in the wake of the general election. Desmond might have wished, however, that his decision to put forward his views on solving the crisis had not come in the same week that his wife, Pat Desmond, launched a legal challenge against fast-track planning laws for large-scale housebuilding.

Days later, in this newspaper last Saturday, over a full broadsheet page, the famously media-belligerent businessman laid out his views on how the Government, funded by taxpayers, should tackle the crisis.

Desmond is domiciled in Switzerland where he owns a ski lodge in Crans Montana. But his businesses employ staff in Ireland, so parts of his empire generate resources for the State. He is entitled to express his views. Just as anybody else in our free society is entitled to highlight that he is, personally, a tax exile, even if he bitterly rejects that label.

Much of the media coverage since has been of Desmond urging an interventionist approach by the State, a popular argument with the public. There has been less coverage of how his wife, with two of her neighbours, has launched a case that could scupper planning permission for thousands of new homes through a fast-track planning process designed specifically to help address supply.

The case taken by Pat Desmond and fellow Ailesbury Road residents, businessmen Chris Comerford and John Gleeson, aims to overturn the strategic housing planning laws that were used by Cairn Homes to obtain permission for 611 units on a former part of the RTÉ Montrose site just beyond the Desmonds’ back garden. The same process has been used to obtain planning for scores of other developments.

When businesses seek the support of local communities for a nearby project, their executives often end up canvassing directly, consuming gallons of tea and mountains of brown bread at scores of kitchen tables.

Cairn executives are understood to have visited a number of high-profile D4 residents in their homes late last year to engage with them about its plans. Many were fiercely opposed, and left the Cairn executives in no doubt about their willingness to fight back.

Pat Desmond is her own woman, of course.

Meanwhile, Desmond’s manifesto in The Irish Times last week was – let’s face it – inherently unremarkable, common sense stuff. It contained no silver bullet to solve the crisis. Most of the policy ideas have been proposed before in some form or other, and it didn’t take 4,200 words to do so.

It didn’t really tell us anything new. His decision to write it and seek its publication, and the intense subsequent reaction in the wider media landscape did, however, tell us a little about Desmond and also ourselves.

Often in this State, powerful people with the most to say on national issues are among those least open to robust scrutiny of their positions. Like modern-day bishops of the business world, they prefer to preach from the pulpit and then retreat behind the security of their high walls.

Notwithstanding his obvious acceptance that newspapers are essential vectors for informing the public, Desmond is notoriously scratchy in his dealings with Irish media. He has acknowledged this tension himself.

Days before the last millennium ended, he famously responded to a robust Fintan O’Toole column by sending him a poem by black civil rights activist, Maya Angelou – “Does my sexiness upset you?/Does it come as a surprise/That I dance like I’ve got diamonds/At the meeting of my thighs?”

‘Not a tax exile’

This striking sense of victimhood was again evident in a 2004 interview, perhaps the last he, as one of the most powerful men in Irish business, gave on his business affairs to a national publication. It was with Business & Finance magazine, which had given him an award: “I am not a tax exile . . .” he said. “The reason I left is to have the freedom to do what I want to do. I’m avoiding politicians, I’m avoiding the press and I’m avoiding small-minded people.”

In November 2010, the day before the public learned the State would need a bailout, Desmond again complained in a speech at a Dublin golf conference that he left Ireland to avoid being “suffocated by journalists and politicians”.

“Despite the oft-repeated, incorrect claim that this was tax-driven, it was actually because I wanted to pursue international opportunities . . .” he said.

How does this square with the fact that Ireland is one of the most globally connected economies in the world? You won’t find more international opportunities up a Swiss mountain or in Barbados. You may, however, find less scrutiny. Desmond may argue otherwise, but he appears to resent the sort of examination and pushback to which all wealthy and extremely powerful people ought to be subject in a properly functioning society.

And we, as a society, ought to insist on applying this scrutiny, rather than being grateful for the one-way pronouncements of gurus who like to be heard, but not seen. Doubly so when it involves people tax-resident abroad expressing strong views on how Irish taxes should be spent.

The day after his Irish Times piece, Desmond did conduct a 10-minute radio interview on the topic with experienced RTÉ broadcaster Miriam O’Callaghan. He simply rehashed his views. He wasn’t asked if he had an opinion on how his wife’s bid to overturn fast-track planning laws might help build more homes for Irish people outside Dublin 4.

Those are the sort of robust issues that often get teased out in detailed newspaper interviews with powerful people who have the confidence to subject themselves to reasonable public scrutiny.

Others simply prefer to preach.

– The day after Desmond’s proposed solution to the housing crisis was published in this newspaper, his friend and erstwhile investment partner in the newspaper business Denis O’Brien was interviewed in UCD student publication the College Tribune.

O’Brien lauded his “umbilical connection” to UCD, his alma mater, and urged the State to provide more funding for third-level education institutes.

The businessman, who is tax resident in Malta, also appeared to criticise the State for allowing multinationals to come here to “take advantage” of the Irish tax system. But isn’t that all that O’Brien and Desmond are doing with their respective choice of domicile?

O’Brien then had a go at the Government for its perceived tardiness in addressing the biggest environmental issues: “Climate change will force Ireland to become much more responsible about energy forms and no time should be wasted in accelerating our efforts regarding climate change and sustainability. There is too much feet-dragging by the Government. The next generation will hold us responsible if we don’t implement rapid change.”

Although, like Desmond, a serial litigator against Irish newspapers, O’Brien lamented the decline of traditional media as “regrettable because they are largely governed by rules, regulations and standards”. Nice to hear him say it.

He also had some sharp words for social media companies against whom he has fought a long-running battle for revenue-sharing deals with his telco, Digicel: “The growth of social media has been allowed to spread across the globe without checks and balances, without accountability and in most cases hidden behind the cloak of anonymity. This growth is so rampant that governments and regulatory authorities just look the other way. All this has resulted in the truth being compromised and the reputations of good and decent people frequently shredded. It’s only a matter of time before Facebook is regulated.”