Crises like Brexit jolt Ireland into action, but long-term planning is for the birds

Caveat: Prompt action in emergencies contrasts with sloth in dealing with chronic problems 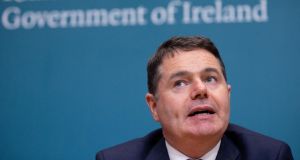 Once the dust settled after Tuesday’s solemn budget, what was most remarkable was, in fact, just how quickly that dust settled. There was little cribbing and moaning, and, with the muted exception of a few civil-society groups, more a general air of acceptance.

It is just a few months until a general election. Yet the mortal enemies – Fine Gael and Fianna Fáil – were still able to co-operate on a necessarily scabby budget, all in the name of combating the national crisis that comes with the spectre of a no-deal Brexit.

A few Opposition politicians went through the motions, feigning anger over, for example, the failure to raise the minimum wage. But, with most of them, you could see their hearts weren’t really in it. The media shrugged its shoulders and went along with it all. So did the majority of the usual vested-interest groups.

Isn’t it remarkable how the Irish body politic, and most societal and economic interests, can bind together in a broad consensus for action when potential disaster stares us in the face? Yet when considering a more nuanced problem deep in the distance, one that requires emotionless long-term planning, those same interests can’t help but gouge out each other’s eyeballs in the row over what to do.

Quick! The watchkeeper has just spotted a no-deal Brexit, dead ahead! Everybody get to it: hard to starboard, reverse the engines, man the lifeboats, all hands on deck. Sure thing captain, comes the reply.

But if it is a recurring homelessness crisis, a climate disaster, or a perennially-knackered health service, we’re all still below deck playing cards, tattooing anchors on our biceps, arm wrestling and slugging whiskey until it is too late and the water is bubbling around our shins. And then we drown.

Eoin O’Malley, an academic from Dublin City University, correctly identified this curiosity in a tweet on Wednesday: “#Budget2020 shows that the Irish system really responds to what it perceives as acute crises, such as Brexit. But give it a chronic, slow growing problem, such as housing or transport, and the reaction is always sticking plaster levels of action.”

It isn’t just Brexit. A similar mindset was evident during the foot-and-mouth crisis in 2001. You couldn’t step off the plane at Dublin airport on the way back from a Manchester United match, but you’d just blithely walk through some tray of industrial-grade chemicals, lest you brought in sheep germs from the Stretford End and shamed the nation. Farm areas were virtually off limits. Public gatherings were kiboshed. St Patrick’s Day was cancelled, kids’ birthday parties, the lot. Everybody accepted it.

A different version of the mindset kicked in at the outset of the financial crash just over a decade ago. Yes, people were livid at austerity. There was recrimination, despair and an acute recognition that the weakest in society were being made to pay a desperately heavy price. But, in the main, Ireland got through that difficult period without the system caving in and, if the fabric of society frayed, it did not rip.

It wasn’t a utopian love-in where everybody picked up a shovel; the State didn’t turn into a kibbutz overnight. There was a degree of division and rancour. But nowhere near as much as you might have expected, given what happened. Or even as much as happened elsewhere.

In some quarters, there was even a perverse national pride taken in the fact that, while Greece burned, the Irish collectively clenched our teeth, swore to ourselves in whispers, but still swallowed bitter medicine for the greater good.

Ed Brophy, the senior adviser to the Minister for Finance, Paschal Donohoe, responded to O’Malley, asking whether this acute-versus-chronic action disparity is “unique to the Irish system”. He highlighted that other countries struggle with long-term social and economic issues.

This, too, is a fair point. There is nothing the Irish love more than fetishising our self-proclaimed uniqueness, when we’re not that special, really. There are housing crises all across the western world.

The commonly-accepted standard bearers of long-term planning over short-term gains, the swots of strategy, are meant to be in China. Westerners look at how seriously they pursue the Belt and Road initiative, the international strategy for Chinese expansion until 2049, and contrast it with the paucity of long-term thinking over here.

Yet even the Chinese falter in their strategic actions. The one-child policy immediately unburdened its adult workers in the 1980s for a quick tilt at prosperity. Yet, now, there is said to be a looming shortage of the next generation of workers to keep those one-child Chinese parents in comfortable retirement: a direct result of that policy.

And while the Chinese have quickly developed their industries, they’ve botched their own urban air quality to do so. Where is the long-term thinking in that?

Whether Ireland is unusual or an outlier in our capacity for emergency action while being slow on chronic issues is largely irrelevant. It doesn’t change that the characteristic is a fact. We’ll see through Brexit, and the whole State will do whatever is necessary to get through it. Much virtue will be made of Irish stoicism and capacity for action in the face of peril.

But as the State misses long-term climate targets, as patients still languish on hospital waiting lists years hence, and as public transport stays in a time warp while people box the heads off each other over Bus Connects and their front gardens, Ireland’s limitations in devising long-term strategy will remain a part of us. Whatever about anybody else, it’s the way we are.

– Helen Dixon, the Data Protection Commissioner, is being declared a martyr by some after the Government chose to mostly ignore her request for extra funding in the budget this week.

Despite her role as, effectively, the European regulator under GDPR rules for online giants such as Facebook, Twitter and Google, Paschal Donohoe did not accede to her request for an extra €5.9 million to bring her annual budget above €21 million. Instead, he gave her only an extra €1.6 million, bringing her office’s allocation to €16.9 million. This has fuelled fears at home and abroad that the tech giants get an easy ride here.

Some observers are understandably viewing the Government’s snub of Dixon in the context of her role as the regulator who has publicly clashed with Ministers over the legality of aspects of the State’s public services card scheme. It is viewed by some as a national identity card by the back door, and Ministers’ actions have done little to assuage concerns.

Even if the Government didn’t punish the regulator financially for having the temerity to challenge the State over the public services card, Donohoe should have been alive to the possibility of that perception arising. If he was alive to it, but snubbed her anyway, the Government cannot complain about the flak coming its way.

Reining in the tech giants of Silicon Valley is an issue of global concern. As home to their international headquarters, Ireland has a special role to play. I have seen comment on Dixon’s budget issue from prominent tech journalists in the United States, Italy, Germany and elsewhere. It doesn’t look good.

It also weakens the DPC in the eyes of the tech industry, as it strives to regulate the behaviour of most powerful businesses the world has ever seen.

– The State agencies that oversee the tourism industry will get an extra €40 million next year, but only if there is a no-deal Brexit. If there is any other outcome, then the budget appears to have allocated the sector nothing extra for 2020.

It was also announced on Tuesday that the Government has found, from somewhere, an extra €7 million for the tourism agencies for this year, although it must be spent by year end.

If, no deal aside, there is no increase in the sector’s formal allocation in the budget for next year, does that mean that it is, in effect, a €7 million budget cut, assuming this week’s from-down-the-back-of-the-couch trick isn’t repeated in 2020?