Caveat: Some business people saw the K Club as a sort of Narnia, a fantasy land that proved Ireland had the strongest little economy in the world 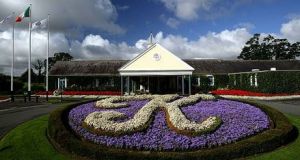 The K Club was the brainchild of one of the State’s most successful businessmen of any era, Michael Smurfit. Photograph: Getty Images

The K Club golf resort in Co Kildare, which has just been sold by Michael Smurfit for more than €65 million, has always occupied a special place in that clubby nexus between the Irish sporting and corporate worlds. With its two championship golf courses and five-star hotel, the 550-acre estate is undeniably high class.

It is hardly unique as a golf resort, however. There are scores of similar venues in its classic parkland style, and just as good as the K Club, all across Europe and the United States. It might be impolite to suggest, but there are even better golf venues than the K Club on this island. They just don’t have the its corporate cachet.

So what is it about this particular golf resort that still draws the cream of the Irish business fraternity to its delicately manicured greens and fairways?

It is because the K Club will forever be associated with corporate Ireland’s high watermark of self-regard, the Ryder Cup in 2006. Some business people may even see the Co Kildare venue as a sort of Narnia, a fantasy land where it was demonstrably true that Ireland had the strongest little economy in the world, the consensus tale of that time.

It is more than 13 years since the competition took place in September 2006. That month was, looking back, the emotional peak of the Celtic Tiger’s delusion years. The Irish business fraternity, which had deceived itself into believing it could walk on water, had no idea that the beginnings of carnage lay just around the corner.

It was too distracted to think about it anyway. The entire Dublin business establishment was crammed into the K Club on the greatest jolly it had ever seen. It was like all of corporate Ireland had gatecrashed a Hieronymous Bosch painting, excess everywhere.

Yet even before the Ryder Cup the K Club was still uniquely placed to be corporate Ireland’s spiritual Narnia. It had all the right heritage, after all. It was the brainchild of one of the State’s most successful businessmen of any era, Michael Smurfit. It was originally developed in the early 1990s by one of the State’s most successful blue-chip corporations, the Jefferson Smurfit Group. The year before the Ryder Cup, Smurfit personally bought it in partnership with Gerry Gannon, a property developer, and we all know that developers were the business druids of that age.

But you’d think with all that corporate heritage that the K Club would have embodied the most sacred principle of business: to make a profit. With the exception of the frothiest years of the Celtic Tiger boom in the run-up to the Ryder Cup, the K Club has pretty much always been in the red, and it still is.

At the end of 2018 it had accumulated losses of €49 million. It lost €3.7 million that year even though it was a record breaker for inbound tourism, including never-before-seen numbers of the sort of US tourists who go weak at the knees for courses like the K Club.

About 15 years ago, when Smurfit and Gannon bought it, the K Club was valued at about 1.5 times what it just changed hands for this week.

Even in 2012, in the depths of the recession, when Smurfit snapped up Gannon’s near-half stake for about €40 million, the K Club was still valued at more than it is now, even thought it has sucked up heavy investment in the meantime. In those eight years the economy has rebounded like a basketball. Yet the K Club is still in the red.

That is because prime golf resorts are the ultimate trophy assets. Business people don’t buy them to make money. They buy them because they are business people and they want to announce their status. Remember when Sean Quinn bought the Belfry in England for €270 million in 2003? It seemed as crazy back then as it does now, but Quinn never cared. He had his trophy.

Top resorts, regardless of whether there is a golf course attached, are money pits. Buying status is an expensive pursuit.

The family business of South African tycoon Beatrice Tollman has poured about €75 million into Ashford Castle in Co Mayo. JP McManus has had to lavish at least €80 million on Adare Manor in Limerick, although it has led to the Ryder Cup for 2026.

US businessman Fred Krehbiel has invested tens of millions into Ballyfin in Co Laois, after which he “stopped counting”.

It would be a surprise if any of those people got all of their cash back, even in one of the strongest tourism markets in Europe.

It is with all of these heavily-invested status symbols that the K Club must now compete under its new owner, TLC nursing homes operator Michael Fetherston. Can he succeed where Smurfit, one of the most talented business executives of any Irish era, failed, and turn the resort into a consistently profitable business?

Fetherston does have some experience in the hospitality industry, although it is rather more prosaic than owning a former Ryder Cup venue. He has for years been associated with the Clifton Court budget hotel on Dublin’s quays. It’s a long way from there to a five-star resort in Straffan.

He has also been an investor in several pubs in Dublin city and its suburbs.

When selling the K Club to Fetherston, Smurfit said the new owner was “uniquely placed” to drive the business forward. Perhaps he is, although we shall see. In the meantime he’ll have a far more interesting place to show his friends around than one of his nursing homes.

– The use of the Irish civil courts as forums for defamation disputes with roots in lands far away continues, according to the latest filings in the High Court.

One interesting side effect of being the Silicon Valley of Europe is that when people from almost anywhere in the world outside of the US want to sue a social media giant over something posted about them, it is to Dublin they must come.

Last week, a Moldovan and UAE-linked cargo airline Aerotranscargo launched proceedings in Dublin against Twitter and Babak Taghvaee, an Iranian writer and defence analyst who is also a major critic of Iran’s theocratic regime.

Aerotranscargo’s name has often appeared online in reports about who may be delivering cargo to certain people inside the war-torn state of Libya, although it has always strongly denied any wrongdoing.

Taghvaee repeated some of the offending suggestions on his Twitter page, leading to legal complaints from the airline. He then published online the legal letters from the airline’s British-based lawyers, along with a few colourful suggestions about where they should stick them.

He is now in the legal crosshairs of Aerotranscargo and its Belfast defamation lawyer Paul Tweed, who has filed the proceedings in Dublin.

The Aerotranscargo case is the first this year against the web giants. There were six such Irish cases last year against Google, four against Twitter and about 12 against Facebook. There were many more in previous years.

Add in the raft of Irish data protection cases due to the web giants, the strain on regulators, the global damage to Ireland’s reputation caused by their tax planning, and the drain on the electrical grid of data centres, and the side effects of Silicon Valley’s presence in Dublin begin to mount up.