What have the British ever done for us, eh?

Caveat: When Germany and France were trying to bully us over tax affairs, which nation stood beside us? Britain 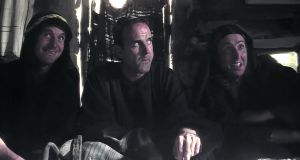 The deliberations of the People’s Front of Judea in Life of Brian. An irritated Reg has to concede that the Romans in fact gave the Judeans aqueducts, sanitation, roads, irrigation, medicine, education, wine, public baths and law and order

As the European Union waves goodbye to Britain when it exits the bloc on Friday night, let us reflect on what the concept of Britishness means on this side of the Irish Sea. Here such considerations come pre-wrapped in grievance as a result of our shared history. But leaving aside our jealously-guarded anguish over the 800 years of oppression, most Irish people have always interacted with our nearest neighbour in a pragmatic way when it comes to everyday life, culture and commerce.

Being Irish, how do we consider Britishness in the mode of simple things, mundanities, such as the best of British food? For many it may be roast beef and gravy with Yorkshire pudding and all the trimmings. The French might deride the British as les rosbifs, but the French don’t have a clue what they’re missing.

Who among us doesn’t have an opinion on the best of British music? Us Xennials born in the year Margaret Thatcher took power came of age listening to Oasis and Blur. And what of the best of British cinema? The British have made a plethora of great movies, but none better than Monty Python’s Life of Brian, another 1979 gem.

The best scene involves John Cleese as Reg, a leader of the hapless biblical-era resistance group the People’s Front of Judea, which wants to evict the Romans. As they plot to kidnap Pontius Pilate’s wife, angry Reg tries to rouse his shambolic crew by recalling the centuries of injustice, and asking what the Romans gave in return.

Eventually, after a few interjections from the floor, an irritated Reg has to concede that the Romans did, in fact, gave the Judeans aqueducts, sanitation, roads, irrigation, medicine, education, wine, public baths and law and order. But apart from all of those things, he screams, “what have the Romans ever done for us?”

I am reminded of Reg’s frustrations when considering Britain’s exit from the EU. As it leaves the bloc there is a temptation here to lapse into schadenfreude at this apparent act of national self-harm by the British. It feels good to laugh at their stupidity, and tell them not to slam the door on their way out.

But it is also easy to forget that there were many good reasons why the Government did not want the British to leave. Aside from the direct economic impact, the UK was the State’s staunch ally in the EU on a whole range of business and economic issues.

In the corridors of Brussels and at the grand tables were the big decisions were thrashed out, what have the Brits ever done for us, eh?

Quite a lot, as it happens.

It may just be coincidence, but Ireland’s national resolve on corporation tax sovereignty gives the appearance of diluting at exactly the moment that the British are leaving the room.

When the Germans and the French – always the French – were trying to bully this State over its right to conduct its own tax affairs, which nation stood steadfastly beside us? Britain.

It maintained this support even while the Irish exchequer had its hands in the back pockets of the treasury in London. Irish officials turned a blind eye to the tax gymnastics of US multinationals who used their Dublin bases to pay lower corporation tax on revenues that were really earned in the UK but routed to here.

Even as we rolled them over for hundreds of millions of euro in tax foregone, the British always forthrightly backed Ireland’s right to manage its own tax affairs. They backed us on a swathe of issues relating to economic liberalism.

We weren’t always so collegiate in return. It is more than 11 years since the late former minister for finance Brian Lenihan poked his British counterpart, Alastair Darling, in the eye with an overnight blanket bank guarantee at the height of the global financial crisis. The next morning, deposits were flooding from British institutions into Irish banks, much to Darling’s understandable anger.

You can draw a straight line that leads directly from the night of the bank guarantee to this State succumbing to a troika bailout two years later. And how did the British government get its own back?

It gave us a €3.8 billion loan on favourable terms in 2010 to help keep the lights on. It did this at a time when the UK’s own finances were beginning to wobble.

It may have been self-serving for the British, who were ensuring the stability of one of their biggest export markets. But the then UK prime minister David Cameron still pushed through that loan at considerable political risk to himself.

Ulster Bank, owned by Royal Bank of Scotland, has for decades been an integral part of the Irish banking system. Its lending was as errant in the Celtic Tiger glory years as any Irish-owned bank, as they all lolled around in the puny shadow of catatonic Irish regulators.

Bailing out our own banks cost Ireland €64 billion. If RBS, backed by British taxpayers, hadn’t stepped in to bail out Ulster Bank to the tune of £15 billion we would have been in an even worse state.

British financial institutions in sectors such as insurance and commercial banking passported into Dublin under EU rules to provide much-needed competition to our indigenous lot. British companies have always bought Irish commercial properties, employed our young people, swallowed up our exports. The list is long.

So as we snigger while the British leave the EU club, we as its nearest neighbour, with which it had the most complex relationship, ought to ask ourselves a simple question.

Apart from the political support, the tax solidarity, the bulwark against Franco-German bullying, the loans, the bank bailouts, the injections of competition, the trade and purchase of our exports, what did the Brits ever do for us, eh?

We will miss them when they’re gone.

Guardian Media Group (GMG), publisher of the British daily newspaper, this week became the first major media organisation to eschew all paid advertising from fossil fuel-extracting companies as part of its efforts to show leadership on climate change.

Black-listing oil and gas companies is an increasingly public way for environmentally-conscious funds and other entities to showcase their green credentials. It makes sense on that level and it also pleases activists.

It is difficult to regard the move as anything but superficial tokenism: GMG was never exactly cover-to-cover with advertisements for ExxonMobil, Lukoil, Chevron or Royal Dutch Shell. The Guardian made this move because it cost it very little to do so. It ran very few oil and gas company ads anyway.

Stretching GMG’s logic to its obvious conclusion, if the aim was to have a real impact on the use of fossil fuels (and why do anything if it has no real impact), why stop at extractive companies? They only extract the black stuff because others sell it down the line for them.

Why did the publisher not also ban ads for Tesco? The supermarket group is, after all, among the biggest purveyors of fossil fuels to the UK public with its sprawling network of 600 filling stations. Why did it not ban ads for car companies? Airlines? Travel agents? British Gas? Apple (mobile phones have many components made from petroleum)?

The move has opened up a Pandora’s Box. GMG’s answer is that stopping other ads “would be a severe financial blow”. So it took an easy, painless decision to gain public plaudits instead.

That’s precisely the sort of greenwashing that its excellent environmental coverage often rails against.