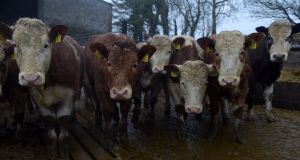 The Central Bank study suggests that beef and sheep farms, which represent around 70 per cent of Irish farms, already face “significant viability challenges”

Up to a third of Irish farms could be forced out of business in the event of no-deal Brexit, a Central Bank study has warned. The analysis suggests that beef and sheep farms, which represent around 70 per cent of farms, already face “significant viability challenges”. According to the study, these businesses would struggle to survive a no-deal Brexit, which could see WTO tariffs of up to 50 per cent of the current export price being levied on exports from the Republic to the UK.

The EU’s second-highest court is set to hear arguments today and tomorrow from legal teams representing Ireland and Apple as they appeal the biggest antitrust decision ever delivered by the European Commission. The commission ruled in August 2016 that Ireland had given the iPhone maker some €13 billion of illegal tax aid. Joe Brennan reports from Luxembourg.

The cost of rebuilding a home in the Republic is now equivalent to what it was at the height of the boom thanks to rapid acceleration in labour costs and the impact of new building regulations. New figures show the cost of rebuilding a three-bed semi-detached home in Dublin is now €207,669, which is almost the same as it was in 2008.

Cigarettes and diesel are cheaper in the Republic than in the North, according to a new Revenue price survey, which compared prices in August. Fiona Reddan singles out the goods that are cheaper on either side of the Border.

Troubled travel software maker Datalex believes earnings for this year could dip or grow by up to $1 million (€900,000). It issued the statement ahead of today’s agm. Barry O’Halloran reports.

Laura Slattery expects more passions to be provoked by the hovering axe at RTÉ, and in her Media & Marketing column today asks how long can the Government distance itself from the broadcaster’s woes?

Finally, in our personal finance features, Fiona Reddan looks at money matters for students and parents, with advice on picking the right bank and avoiding big college debts. Meanwhile, Proinsias O’Mahony outlines how stock markets are grappling with the Trump threat.