When Trump tweets, the whole financial world catches a cold 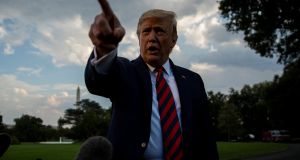 US president Donald Trump: He is no longer merely venting on Twitter, but using his tweets as a policy tools. Photograph: Anna Moneymaker/The New York Times

Scarcely a week passes without stock markets being roiled by a tweet from Donald Trump. How big a threat is the volatile US president to stock markets? Investors have long grappled with the implications of a Trump presidency. Prior to his surprise election victory in November 2016, the consensus was that Trump’s unpredictability and protectionism made him a dangerous candidate. Stocks tanked immediately after Trump’s victory was announced, but the mood then suddenly shifted, with investors focusing on “good” Trump and market-friendly promises such as corporate tax cuts and deregulation.

In the end, 2017 was blissfully easy for investors; not only did stocks rally hard, they did so without a hint of volatility. Even Trump’s aggressive tweeting style – he attacked numerous companies such as Boeing, Lockheed Martin and Amazon – failed to bother investors, who bet that the president’s bark was worse than his bite. Since then, however, the market focus has again turned to “bad” Trump: his protectionism, his impulsiveness, his unpredictability. The US-China trade war is now 18 months old and indices have been largely range-bound over that period, with stocks tending to rally when it appears trade tensions are easing, only to fall back when they erupt again.

Trump’s tweets, dismissed in 2017 as largely harmless populist outbursts, are now a source of serious market strain. Trump is no longer merely venting on Twitter, but using his tweets as a policy tool.

At the end of May, stocks tumbled after he threatened Mexico with tariffs unless it took steps to curb illegal immigration to the US – a move that spooked many strategists, who noted that tying tariffs to non-trade policy only increased uncertainty for businesses concerned about the future policy outlook.

The recent bout of market turbulence began on August 1st, when Trump tweeted that the US would initiate fresh tariffs on China. The Dow Jones lost over 600 points on August 23rd, with the decline accelerating in the minutes after a Trump tweet that “hereby ordered” US companies to “immediately start looking for an alternative” to doing business in China. Stocks rebounded after a more conciliatory Trump tweet the following trading day, when he tweeted that China had asked to “get back to the table” on negotiations. Overall, the tweets “seem to have gotten wilder and more unhinged”, says Ritholtz Wealth Management chief executive Josh Brown, and markets are “picking up” on the idea that “there really isn’t any rhyme or reason to much of what we see and hear each day”.

While strategists have long been wary of Trump’s aggressive protectionism, they have consoled themselves with the idea that Trump is a bull market cheerleader who keeps a close eye on index movements and who views market gains as proof of his economic genius. However, there is increased doubt as to whether the “Trump put” – the belief Trump will soften his rhetoric and implement market-friendly actions in order to prevent serious market declines – remains relevant.

Since July, says Neil Dutta of Renaissance Macro Research, the S&P 500 has lost about 135 points (4 per cent) on account of negative trade war headlines.

“The strike price on the fabled Trump put may be lower than commonly believed,” says Dutta. Trump cares about big market losses, he says, but “not as much as people think”. That’s echoed by Macquarie analysts, who say the “conventional wisdom that stock index levels provide a meaningful check on the president’s trade policies has not been a valid investment thesis since early August”. Some point to Trump’s own tweets as evidence that he is less keen to ride to the rescue of stock markets than commonly believed. “My life would be much easier if I just said, ‘Let China continue to rip off the United States,’” he tweeted last month. “All right? It’d be much easier, but I can’t do that.”

That may indicate Trump, the self-described “tariff man” who has expressed strong protectionist leanings since the 1980s, is willing to dig in for the long haul, even in the face of market declines. Still, this may also be mere bravado designed to portray the president as a man of principle standing up to the Chinese. In any event, it would be an exaggeration to say Trump no longer cares about stocks. Market gains under Trump look much more impressive if one measures indices’ performance from his election victory in November 2016, compared to from his inauguration in January 2017 – a point he recently stressed on Twitter.

“My Stock Market gains must be judged from the day after the Election, November 9, 2016, where the market went up big after the win, and because of the win,” he tweeted on August 25th. “Had my opponent won, CRASH!”

These are not the words of someone who is content to witness heavy market falls.

More likely, perhaps, Trump is gambling that trade war-related uncertainty will force the Federal Reserve to keep cutting interest rates, thereby warding off any recession threat and keeping the market rally alive until after the November 2020 election. Trump has been fearsome in his criticism of the Fed, particularly chairman Jerome Powell, last month asking whether Chinese leader Xi Jinping or Powell was a bigger “enemy” of the US. Such a strategy is risky. Firstly, the damage caused by the drawn-out nature of the trade war is growing, and reactive rate cuts are no guarantee against a global recession. Secondly, Trump’s continued assault on the independence of the Federal Reserve is causing increased concern.

Last month, former Fed chairs Janet Yellen, Ben Bernanke, Alan Greenspan and Paul Volcker wrote a joint Wall Street Journal op-ed demanding the Fed “be permitted to act independently and in the best interests of the economy, free of short-term political pressures and, in particular, without the threat of removal or demotion of Fed leaders for political reasons”. Bill Dudley, a former senior Fed official, has gone much further. The Fed has indicated it will lower rates if trade tensions darken the economic outlook, but this accommodation might encourage Trump to escalate the trade war further, Dudley cautioned, thereby increasing recession risk. Dudley called on the Fed to not “bail out an administration that keeps making bad choices on trade policy”.

Remarkably, he added that the 2020 presidential election potentially “falls within the Fed’s purview” in that a Trump re-election “arguably presents a threat to the US and global economy, to the Fed’s independence and its ability to achieve its employment and inflation objectives”. While Dudley’s concerns are shared by many, commentators were stunned a former Fed official would openly call on the Fed to interfere in the election process. Former treasury secretary, economist and Trump critic Larry Summers summed up the thoughts of many, labelling Dudley’s comments “grossly irresponsible” and saying the Fed’s job “is to stay out of politics”. Nevertheless, the fact that Bill Dudley – a “classic ‘company man’” and “the last establishment figure I would expect to go rogue”, as DataTrek Research put it – said what he said is telling, confirming that many in the financial world are increasingly worried by the behaviour of the US president.