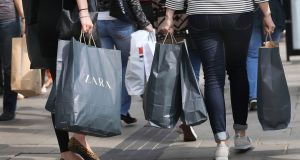 Inflationary pressure in the Irish economy remains weak with the latest official figures showing prices rose by an average of 0.7 per cent in the 12 months to August. This was marginally higher than the 0.5 per cent recorded in July.

The main monthly changes affecting the latest Consumer Price Index were increases in the cost of clothing and footwear due to the ending of the summer sales and health insurance premiums. Against that, air fares were lower than in July.

“Despite strong economic growth, there is as yet little sign of sustained pressure on the prices front, and this is the same story across the euro zone, indicating why the European Central Bank (ECB) is in no hurry to increase interest rates,” analyst Alan McQuaid said.

The main annual drivers of prices here were increases in the cost alcoholic beverages and tobacco (3.1 per cent), and housing, water, electricity, gas and other fuels (2.9 per cent).

The increased cost of housing was fuelled by rising rents, which were up 5 per cent year on year, according to the figures.

In contrast, there were decreases in the cost of communications (-6.3 per cent), which includes telephone services, and furnishings, household equipment and routine household maintenance, which was down 4 per cent.

Inflationary pressure in the Irish economy has been muted for several years on foot of lower oil prices internationally. Euro zone inflation remained low at 1 per centin August, well below the ECB’s 2 per cent target.

As a result, the ECB approved fresh stimulus measures on Thursday to prop up the ailing euro zone economy, cutting rates deeper into negative territory and relaunching an extended bond purchase scheme. Frankfurt cut its deposit rate by 10 basis points to a record low of -0.5 per cent, promised that rates would stay low for longer and said it would restart bond purchases at a rate of €20 billion a month from November 1st.

“The Governing Council now expects the key ECB interest rates to remain at their present or lower levels until it has seen the inflation outlook robustly converge to a level sufficiently close to, but below, 2 per cent,” the ECB said.

1 Lockdown exit: How can Irish economy reopen without big health risks?
2 Finance ministers gather as fears grow even the future of the euro zone is at risk
3 Property market has not felt full impact of Covid-19, warns Sherry FitzGerald
4 I want to change my will quickly in case I fall ill. Do I need a lawyer?
5 Coronavirus: How Covid-19 may reshape the Irish retail landscape
6 Coronavirus: Property rental in the jaws of the epidemic
7 Government announces €1bn in supports for businesses
8 Toast believed to have cut its Dublin staff by 50%
9 Tesco says coronavirus costs could reach €1bn
10 Iseq 20 companies lose €34bn in value due to pandemic
Real news has value SUBSCRIBE