Stormont could play a role in a new Brexit deal, Northern Secretary suggests 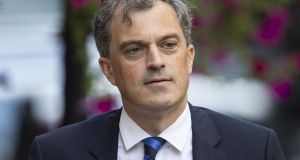 Northern Secretary Julian Smith has suggested a revived Stormont Assembly could have a role to play in any new Brexit deal that had specific Northern Ireland elements. File photograph: Dan Kitwood/Getty Images

A revived Stormont Assembly could have a role in achieving any new Brexit deal that had specific Northern Ireland elements, the Secretary of State for Northern Ireland Julian Smith has suggested.

Mr Smith made his first visit to Dublin on Monday for meetings with Tánaiste Simon Coveney, Minister for Justice Charlie Flanagan and Opposition leaders.

Mr Smith, who took over as Northern Secretary when Boris Johnson became prime minister in July, was in Dublin to discuss efforts to re-establish the powersharing institutions at Stormont. The issue has acquired new urgency as talk of a revival of a Northern Ireland-only backstop proliferates in London.

The backstop is a UK-wide provision within the existing EU-UK withdrawal agreement with the aim of avoiding a hard Border in Ireland after Brexit. It emerged as a key sticking point to the deal being passed by British MPs.

Mr Johnson has suggested that some specific arrangements for the North could be a way of overcoming the current Brexit impasse, while senior figures in London have said that giving a role to a revived Assembly in Stormont could overcome criticisms that the backstop lacks democratic legitimacy.

Dublin remains cool on the idea however, with Ministers and senior officials saying that they will await detailed proposals from the British government, which have not so far been forthcoming. Previously, the Government had been wary of giving a decision-making role to Stormont as part of a backstop arrangement because it would amount to a unionist veto. However, there is a realisation in Dublin that any new deal will also require some movement from the Irish Government.

Senior sources with knowledge of discussions at the top of Government say they remain open to British proposals but are not optimistic that a new Brexit deal can be worked out in the time remaining before the next European Council summit in a month’s time.

Despite consistent professions of optimism about a new Brexit deal from Downing Street, Irish and EU sources are becoming increasingly impatient at the failure of the British to table concrete proposals.

“There’s no great optimism about,” a senior source said on Monday night. “There’s goodwill all round but there’s such a gap between the two sides.”

Minister of State for European Affairs Helen McEntee, speaking in Brussels where she was attending a General Affairs Council meeting to discuss the agenda for next month’s summit, said: “To date, nothing has been tabled. We are urging the UK to put forward those proposals.”

On British suggestions that an all-Ireland agrifood and animal health zone could be the basis for a new Brexit deal that would still avoid checks near the Irish Border, Ms McEntee said such an arrangement “only covers about 30 per cent of trade” across the Border.

“On its own it certainly wouldn’t be enough to fulfil all the commitments,” she said.

Speaking after a meeting with Mr Smith in Dublin earlier on Monday, the Sinn Féin leader Mary Lou McDonald sought to put the focus back on the DUP.

“We do not yet have a partner in the DUP . . . Our experience over the years is that the DUP only move when the British government puts them under pressure to move,” she said.

“The ball is very much in his court and the court of the British government. A solution is only possible if they resolve to stop placating the DUP,” Ms McDonald said.

“The DUP have ducked and dived and refused to land on the deal that we all know is possible,” she said.

Mr Smith was also due to meet Fianna Fáil leader Micheál Martin on Monday evening, and will also have a late meeting with Mr Coveney.

Mr Coveney is also due to bring a fresh Brexit memo to Cabinet on Tuesday, outlining further no-deal Brexit preparations. Officials plan to move the focus of the Government’s advertising campaign on the issue from businesses to the general public, and Brexit preparations will be a key part of Government presentations at the National Ploughing Championships this week.