‘Some ideas are very good’ but must work within backstop, says Declan Breathnach 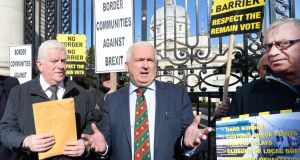 A Border county TD has dismissed a UK think tank’s proposed alternatives to replace the contentious Brexit backstop after attending the group’s “roundtable discussion” in a hotel outside Dundalk.

Fianna Fáil TD Declan Breathnach said he attended Prosperity UK’s “alternative arrangements commission” meeting at the Carrickdale Hotel on the Border at the weekend to hear their administrative and technological proposals to avoid a hard border between Northern Ireland and the Republic.

The Louth TD said there was credibility in some of the proposed solutions but the arrangements did not take into account how the Border community worked and issues of trust and economies of scale between north and south.

“I went there to listen,” he said. “I had engaged with them in the past. I went there to say to them that some of their ideas are very good but it is in the context of finding a solution within the backstop.”

He declined to elaborate on what was said at the two-day conference as it was covered by Chatham House Rule, an informal agreement protecting the source of remarks at a private meeting, but he said he could say that he told them he did not believe their ideas would avoid a hard border and that the backstop was still the best option.

The original backstop, which would keep Northern Ireland and the Republic aligned under EU economic rules, has been rejected by Conservative MPs and the Democratic Unionist Party as “anti-democratic” and undermining the integrity of the United Kingdom as it would keep the North tied to EU regulations.

Prosperity UK’s commission, which is chaired by Remain-voting MP Greg Hands and pro-Brexit MP Suella Braverman, has suggested various measures including a tiered “trusted trader” scheme that would “cut down paperwork and avoid routine customs checks” at the Border.

Mr Hands said the group held their meeting in Dundalk as a “bridge-building exercise” to get feedback on their proposals and to find a potential solution to the Brexit deadlock on the basis that the backstop was not going to pass through the House of Commons.

“The backstop is a route to a no-deal Brexit,” he said. “For anybody wanting to get a Brexit deal that works for all sides and all communities, the answer lies in alternative arrangements.”

The group also proposes special economic zones and regulatory areas both at the Border – between Derry and Donegal, and Newry and Dundalk – and between Ireland and UK that would cover sanitary and phytosanitary regulations protecting food and animal health but based on an assumption that the UK would stay aligned with the EU on these rules initially.

“The only way you can have an economic zone to work is to have an all-island economic zone. You cannot pick and choose because the economies are so intertwined,” said Mr Breathnach.

Mr Hands, who voted for Mr May’s proposed UK-wide backstop and withdrawal deal, said Prosperity UK wanted the Border meeting held in private as it would be more helpful and constructive.

No Government or Dáil representative from Fine Gael attended the meeting.