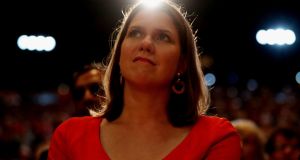 Liberal Democrats leader Jo Swinson will on Tuesday launch a searing attack on Jeremy Corbyn, describing him as part of “the collective forces of nationalism and populism” and blaming him for Brexit.

In her first speech as party leader at the Liberal Democrats’ annual conference in Bournemouth, Ms Swinson will suggest that the Labour leader shares responsibility with Boris Johnson and Nigel Farage.

“When the general election comes, I cannot wait to take on the collective forces of nationalism and populism that will be standing on that debate stage: Johnson, Farage and Corbyn. If he had campaigned to Remain in 2016 with half of the energy he put into the 2017 election, we may have seen a different result,” she will say. “Even now, when faced with all the clear and obvious dangers that Brexit brings, Jeremy Corbyn still insists that if Labour win a general election, they will negotiate their own Brexit deal to take us out of the EU. Nigel Farage might be Brexit by name, but it is very clear that Jeremy Corbyn is Brexit by nature.”

Ms Swinson and Mr Corbyn have worked together in recent weeks on parliamentary efforts to block a no-deal Brexit. But their two parties are competing for Remain voters, and the Liberal Democrats this week hardened their policy by promising to cancel Brexit without a second referendum if they win a general election.

The Liberal Democrats would have to increase their MPs from 18 to more than 320 to win a majority at the next election. But Ms Swinson said on Monday that such a leap was possible, and she ruled out supporting either Mr Johnson or Mr Corbyn as prime minister.

“I reject this suggestion that you go into a general election campaign, particularly in these volatile political times and somehow people have to accept they don’t have a genuine choice,” she said.

“They do not have to choose between Boris Johnson and Jeremy Corbyn because frankly that choice is not good enough. Neither of those men is fit to be our prime minister.”

In an interview broadcast on ITV on Monday night, former prime minister David Cameron claimed that Mr Johnson expected the Leave side to lose the referendum and backed it for reasons of personal ambition. Speaking ahead of the publication of a memoir next Thursday, Mr Cameron said he had spoken to Mr Johnson at length before he decided to campaign to leave the EU.

“He thought that the Brexit vote would be lost but he didn’t want to give up the chance of being on the romantic, patriotic nationalistic side of Brexit . . . minutes before he goes out to explain why he’s going to be on the side of Brexit, he sent me a text saying: ‘Brexit will be crushed like a toad under the harrow.’ Typically Boris: colourful,” Mr Cameron said.

“But I can only conclude that – he’d never argued for it before – he thought it was going to lose and that’s why he made the choice.”