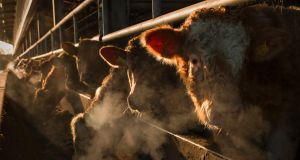 Specialist beef production is the most common farm type or activity but also delivers the worst returns. Photograph: Alan Hopps via Getty

Up to a third of Irish farms could be forced out of business in the event of a no-deal Brexit, a Central Bank study has warned.

The analysis suggests that beef and sheep farms, which represent about 70 per cent of farms, already face “significant viability challenges” as they are the least profitable and rely heavily on subsidies from Brussels.

It said about a third of all farms were classified as economically vulnerable, meaning that farm incomes were insufficient to support the families involved and needed to be bolstered by off-farm earnings.

These businesses would struggle to survive a no-deal Brexit, which could see World Trade Organisation tariffs being levied on exports from the Republic to the UK, it said.

In the case of beef, these tariffs could amount to 50 per cent of the current export price, making Irish beef extremely uncompetitive in its main export market.

“Any future negative shock – even one less material than Brexit – would further expose the underlying weaknesses in the sector,” the report said.

It also noted that the impact of Brexit on farming here would not be evenly distributed.

With a greater dependence on low-margin beef farming, the west, midwest and midlands would be worst hit as they are both less resilient – and more exposed – than the south and east, it said.

Primary agriculture along with food processing and the manufacture of beverages employ 153,000 people, accounting for just under 7 per cent of all jobs.

The agri-food sector generated just over €13 billion in exports in 2018, about 10 per cent of Ireland’s overall merchandise exports, and has long been seen as the most vulnerable to Brexit.

The Central Bank report noted that specialist beef production is the most common farm type or activity, accounting for more than half of all farms in 2016 (78,300).

Given the viability challenges facing many farms, the report’s author, Thomas Conefrey, said options should be explored that would have the dual benefits of safeguarding the incomes of farmers while also delivering reductions in Ireland’s greenhouse gas emissions.

Also commenting on the research, Mark Cassidy, the Central Bank’s director of economics and statistics, said: “Agriculture makes a significant contribution to the Irish economy and also has important distributional effects in the economy.”

“However, low profitability in certain sectors and high reliance on direct payments are weaknesses in the sector that should not be ignored,” he said.

“It provides the context in which all other risks facing Irish agriculture should be considered,” he said.

“With this in mind, risks such as a no-deal Brexit or other negative shocks have the potential to exacerbate existing challenges facing some farmers,” Mr Cassidy said.

1 In praise of Gogglebox Ireland, an essential service in all but name
2 Retailers accused of ‘stealing business’ from rivals by flouting restrictions
3 Nama grants Ronan four-month extension on €160m glass bottle site deal
4 How long can Government afford to keep State pension age at 66?
5 How much will a Covid-19 vaccine cost?
6 ‘Last-chance saloon’ Brexit talks will yield deal, Phil Hogan claims
7 Outgoing Irish a sitting duck for Covid
8 How to avoid a communication breakdown
9 How to improve ethics at your company
10 Wake-up Call: Why unethical high performers are not shunned by peers
Real news has value SUBSCRIBE