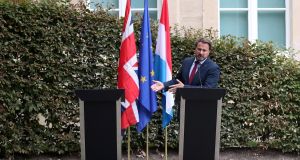 By the time Boris Johnson finally appeared before the assembled journalists, only then to retreat rapidly into an official car, we had been treated to at least 10 versions of Ode to Joy by the chorus at the gates.

Some versions were definitely more musical than others, some were accompanied by what seemed to be a mini-orchestra, but all manifesting a distinctively Luxemburger polite anger as they were broadcast by a small but noisy Remainer crowd that was held only 50m away from where Boris was supposed to address us alongside Luxembourg’s prime minister Xavier Bettel. Betrayed UK citizens living in exile in the Duchy wanted to tell their PM what was what.

Prolonged chanting of “Bollocks to Brexit”, “Stop the coup”, and “Obey the law” were the interludes between the music, and it was soon clear the British PM would never be heard, let alone questioned, by the now increasingly disgruntled hacks present.

Discretion being the better part of valour, he fled to the safety of the British embassy and the comfort of a one-on-one interview with Sky News.

Johnson and his Brexit secretary Stephen Barclay were in Luxembourg for a “working lunch” with European Commission president Jean-Claude Juncker and EU chief Brexit negotiator Michel Barnier. After lunch – chicken oysters, pollock and berries in the former Michelin-starred Le Bouquet Garni – they also had a brief meeting with Mr Bettel, who was supposed to host the press conference afterwards.

Not exactly a negotiation, more a state of play assessment, because there is nothing to negotiate. But all intended to give at least the appearance that Johnson is a buddy trying to get a deal. His EU partners are unconvinced.

When Boris fled Bettel decided to go on alone, revelling in the international reach of his audience. And the hecklers fell silent, more than willing to listen, even applauding some of his more pointed jibes at the missing occupant of the podium beside him.

He did not pull his punches.

The Leave campaign was a pack of lies, Johnson’s constant talk of progress in the Brexit talks is unfounded, and the British PM had brought nothing to the table on the backstop. Asked about Johnson’s apparent willingness to break the law on Brexit, Bettel insisted that “this would not happen in Luxembourg”.

He repeatedly insisted that the Brexit mess was not of the EU’s making. These are “homemade problems” but they had created a “nightmare” for EU citizens.

On the possibility of further Brexit extensions, he warned that such measures would only be sanctioned for a special purpose. “Delays are not in the interests of EU citizens.”

Bettel said his citizens wanted certainty. He repeated the EU commission’s insistence that the EU27 need to see proposals in writing.

Over the weekend Johnson depicted himself as the Incredible Hulk. Amid the Luxembourg piece of theatre, the Daily Telegraph’s Michael Deacon suggested in a tweet that the reality could not be more different.

“My favourite episode of The Incredible Hulk is the one where a small group of people shouted too loudly so he ran away.”

1 Des Bishop apologises to Traveller community for comments in interview
2 One hundred Irish retailers for all your online Christmas shopping
3 Miriam Lord: All test and no trace makes Jack, and heaven knows who else, a very ill boy
4 Gym owner plans to defy restrictions and open
5 Suzanne Lynch’s US Election Diary: Trump ‘walks out’ of TV interview at White House
Real news has value SUBSCRIBE