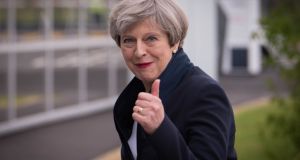 Theresa May: “She only really gets animated these days in order to deny that there is actually anything called Mayism.” Photograph: PA Wire

There is widespread acceptance that the election of Donald Trump, the vote for Brexit and the rise of populism everywhere else have roots in large swathes of people being somehow “left behind”. Two, probably related, categories of the disenchanted are those who simply have not being doing as well, economically speaking, as they had expected and those who feel ignored by so-called political elites. While it is striking just how monolithic is the consensus about what the problem is, there is nothing to suggest that anyone in power has the faintest idea what to do about it. And yet it would be so easy to deal with all of this.

The launch of general election manifestos in the UK is a case in point: the Labour party has an arithmetically challenged set of proposals to spend a lot, raise taxes a bit and renationalise the railways. The Tories think they can achieve a “fairer” Britain by reducing immigration.

Party political manifestos are justifiably famous for being unread. This week’s launch of the UK’s Conservative party’s set of election promises attracted more attention than usual. Sadly, those of us looking for some justification for reading the overly long document were disappointed. There was little by way of additional Brexit details, nor was there much by way of concrete policy proposals in other, almost as important, areas.

Perhaps the most peculiar feature of Theresa May’s manifesto is its economic illiteracy. Her inner circle of policy advisers have been accused of this many times and have, apparently, reacted angrily. But they have yet to demonstrate any sense at all that they know what they are doing.The aspiration to make Britain fairer and to use the power of the state to achieve some semblance of an ill-defined meritocracy is something that both Ed Miliband and Tony Blair would, ironically, applaud; but there is nothing in Mayism that tells us how any of this is to be achieved. Indeed, she only really gets animated these days in order to deny that there is anything called Mayism.

No talk to growth

The only thing that can really make any country better off is an increase in productivity. Without this you can only make sections of society better off by taking money from somebody else: redistribution. Faster growth and less inequality are worthy goals of economic policy. The really peculiar thing in so many countries, especially the UK, is that all of the mainstream political parties seem to have forgotten to talk about economic growth let alone display any semblance of awareness of how to generate any. In fact, it is even worse than this.

Theresa May’s Brexit policies in general – and immigration polices in particular – will reduce economic growth. They are already doing so. But what is really weird is that the government and its advisers don’t seem to care. I think it might have something to do with that inability to appreciate simple arithmetic: when we talk about economic growth being reduced by, say, 0.25 per cent or even 0.5 per cent a year, it doesn’t look like too big a deal, at least to the economically illiterate. It cannot be said loudly enough: these are huge numbers with massive consequences, not least for that group of people whom everyone seems to be worried about: the left behind.

Lower growth has massive implications for the public finances. Thanks to the sterling work of independent think tanks and the Office for Budget Responsibility, the long-term consequences of a rapidly ageing population are becoming all too apparent. The current funding pressures on the NHS, caused in part by the rising costs of social care, need only be run through some very simple spreadsheets for the conclusions to be fiscally terrifying.

One of the things about economic literacy is that it spells out very clearly how everything is joined up – sometimes in not very intuitive ways. Everything in the economy typically depends on everything else. If you don’t understand this, you will never appreciate how cutting immigration in the face of an ageing population will reduce the amount of cash available to care for the old and the sick. That’s because, as Martin Wolf has so astutely observed, Britain exports pensioners and imports young, tax-paying workers.

Everything about the Tory manifesto suggests that Theresa May is very comfortable with the idea that the UK economy is destined for slower growth. But there is no understanding of what this means – or, indeed, that it doesn’t have to be this way. So many of the problems identified by the Tories would simply go away if the British economy were to grow, for a few years at least, quickly. Not least, wages would finally rise as a result of a super hot labour market. Indeed, faster growth would achieve fairer societies in many other countries via this boost to wages.

But there is one aspect of wage rates that even growth cannot cure. The rise of monopoly power across many industries and sectors is a global phenomenon. Karl Marx forecast a crisis of capitalism as a result of falling profits: shareholders can relax as the exact opposite has been happening. As policymakers have forgotten how to generate economic growth they have also ignored the rise of monopolies, particularly (but not exclusively) in tech companies. Those monopolies hold down wages and boost share prices.

The only entity displaying any semblance of interest in the ancient art of punishing monopolies is the EU. It’s the European Commission that now and again shows some teeth when dealing with the likes of Microsoft and Google, which, all things considered, is spectacularly ironic for the left-behind in the UK.

Sorting out the political and economic mess facing many countries requires much faster growth and tackling monopoly power: no other set of polices will cure the problem. Everything but these policies is being tried.