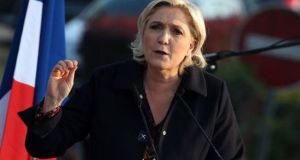 Most of the jobs that Le Pen wants to bring back to France have been lost to machines rather than cheap labour elsewhere in the world. Photograph: Getty Images

In a recent campaign speech Marine Le Pen suggested she wanted France to become more like Donald Trump’s America, Vladimir Putin’s Russia and Theresa May’s UK. Which, if you think about it for a second or two, should give the British prime minister, if not the other two leaders, pause for thought. It’s a pretty damning verdict on many levels.

The British general election has quickly descended into the cesspit of nasty nationalism, and is destined to be the most policy-free campaign in living memory. May has absurdly accused Brussels of interfering in the election; apparently, the Brussels bureaucrats think they can reduce the size of the inevitable Tory majority.

The Conservatives are essentially running their campaign on a war footing with a simple message: the EU is the enemy and there is only one way to defeat it. Quite rightly, Donald Tusk, the European Council president, has called for a truce, for hostilities to end, before it all gets completely out of hand. Given May’s rhetoric, it may already be too late for that.

It’s that nationalism, the appeal to identity politics, that Le Pen finds so attractive. Immigration is a big part of this story, of course. Given that, it would have been slightly more logical for her to have praised China or Japan, two immigration-free countries and, in the case of Japan at least, culturally pure if not completely homogeneous. Both countries still have large manufacturing industries, something Le Pen seems keen to restore to France.

Both Trump and May have promised in various ways to bring back low paid, unskilled manufacturing jobs (they don’t put it quite like that, of course) but have yet to show any sign of knowing how to achieve this (they can’t, it’s impossible).

The Chinese, of course, do have lots of manufacturing industries, plenty of unskilled workers. But they are also beginning to discover the joys of deindustrialisation.

The obsession with manufacturing jobs is understandable if somewhat inchoate. Brexit and Trump voters are often said to be motivated by the loss of smokestack industries, the unemployment caused by globalisation.

I recall a story told by my grandfather who once worked as a docker in the UK. His job was shovelling imported Canadian wheat into sacks. He claimed his job ended the day a big suction pipe appeared over his shoulder.

This, of course, is a story more about technologically-induced unemployment rather than globalisation, a narrative with much contemporary resonance.

Most of the jobs that Le Pen wants to bring back to France have been lost to machines rather than cheap labour elsewhere in the world. France has opened up an astonishing productivity advantage over the UK in recent years precisely because French firms have been ruthless substituting robots for workers. That pressure is less acute in the UK thanks to cheaper labour and far less restrictive labour laws.

Rise of the machine

My grandfather lost his job many decades ago thanks to an early example of the rise of the machine. Anyone who thinks that structural economic change is only a recent problem needs to learn a little history. Workers have been revolting for years when their livelihoods have been threatened.

One of the holes at the heart of economics is the absence of workable solutions to the problems caused by wrenching change, whether driven by technology, globalisation or anything else.

Politicians who mix all this up with questions of identity and ethnicity are playing with fire. Rather than honestly admitting to the problem and committing to the grinding task of finding a solution, the appeal to bash foreigners in one way or another may win votes but will ultimate disappoint. Identity politics will not solve the economic problem.

The ancient Romans knew a thing or two about citizenship and identity. One of the ways they held their empire together was via a clever deployment of various categories of Roman citizenship, granting interlocking rights and responsibilities to all sorts of disparate countries and ethnicities. Europe could well learn from its own history and unilaterally grant the British a form of European citizenship.

Perhaps it is even something Ireland should consider. After all, British citizens in the North already have the right to an Irish passport. Extending this gift to the rest of the UK would have some interesting consequences.

As a gesture of goodwill it would be deeply appreciated by at least 50 per cent of the British population. Tourism could be boosted by simply requiring aspiring citizens to spend a weekend or two here. At the very least it would be terrific PR.

The Romans had a category of citizenship called civitas sine suffragio, citizenship without the vote. It’s worth considering, not least to witness the impotent fury of the Brexiteers in the face of such a magnificent and magnanimous gesture.