Chris Johns: May almost sure of mandate, but could lose UK

With a general election looming, the British PM’s hard-Brexit obsession has blinded her to reality 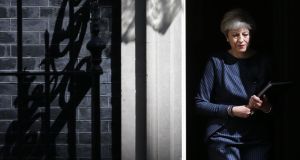 Theresa May: untainted by exposure to economics or tough financial decisions, the British prime minister can pursue reduced immigration as her prime goal. Photograph: Daniel Leal-Olivas/AFP/Getty

Theresa May is said to celebrate the fact that she has never been near the UK treasury. Untainted by exposure to economics or tough financial decisions, she can pursue reduced immigration as her prime policy objective. She failed to hit her immigration targets as home secretary, so Brexit and her accession to 10 Downing Street gave May an unexpected but welcome second bite of the cherry. The logic of her adoption of a rock-hard Brexit was dictated entirely by the need to eliminate the free movement of people, which in turn was mandated by her unresolved issues around immigration.

As May has discovered, all of this was fantasy. Starting with her decision to appoint a trio of weak, shallow, unserious men to run the Brexit project, it has been clear that competence is as noticeable by its absence as delusion is clearly ubiquitous. “Have cake and eat it” wasn’t just a joke made up by comedians to describe the UK government’s Brexit strategy: it was the strategy. When Boris Johnson, the foreign secretary, claimed that if the UK falls out of the Brexit talks with no deal it will, nonetheless, “be fine”, we marvelled at how the bulk of the British press takes seriously such lunacy.

But the biggest delusion was a small matter of detail: that it can all be done in two years. The ways of the European Union have been burrowing deep into the bowels of the UK for more than four decades. To describe the complexity as Byzantine doesn’t even come close. A brief conversation with a competent lawyer leads to the conclusion that Brexit could easily take a decade. A British prime minister has to engage with the treasury sooner or later, no matter how much she may detest economists and financial types. And the message will have been consistent and clear: we may have misread the immediate aftermath of the referendum, but the thrust of the analysis stands, and the logic is inescapable. Brexit will damage the UK economy. It is an act of self-harm.

May was able to ignore the treasury for as long as nobody stood up to her. Then she sent the article-50 letter and started to meet some very serious people

May was able to ignore the treasury for as long as nobody stood up to her. Then she sent the article-50 letter and started to meet some very serious people: the men and women who run the EU. They have been waiting patiently, formulating their strategy around clearly defined goals. Unlike the tactics adopted by Brexiteers such as Johnson and Liam Fox, secretary of state for international trade, the European approach is devoid of emotion. Cold, hard logic dictates that the UK must be made worse off as a result of Brexit. The EU needs that outcome.

That such a result will be easy to engineer is merely a bonus. The balance of negotiating power is tilted entirely in Europe’s favour: Angela Merkel, the German chancellor, has known this for a while. May has just discovered it. Europe will offer the PM her implementation period. But the terms will be demanding: open borders, no immigration curbs and a hefty cheque. And no role for the UK in decisionmaking. All the costs of membership with as few of the benefits as possible. Not exactly “taking back control”. But that’s what is on the table: take it or leave it. The British will have to take it, as the alternative – crashing out of the EU in two years – is so much worse. That’s called an unbalanced negotiation.

Competence is not just absent from the British cabinet table. The civil service has been starved of personnel and resources for years

Another small detail: competence is not just absent from the cabinet table. The civil service has been starved of personnel and resources for years. Expertise and headcount have shifted to the EU and the City. There are still good people in Whitehall, but in nowhere near the numbers necessary to deliver anything like a reasonable outcome on a short timescale. But those proper civil servants still left giving advice will all have been saying the same thing: it’s going to be ugly on any timescale and simply can’t be delivered in two years.

The first, tentative signs of reality dawning came only last week, when we began to hear talk of the implementation period. Calling it anything but its proper name is another display of unseriousness: disguise, deflect and dissemble. Anything but own up to the truth. Brexit will be a disaster and, in any event, take years to achieve.

Brexit delusion may be Theresa May’s biggest problem, but there is also the lunatic wing of the Tory party. The prime minister will, sooner or later, concede that implementation could take a decade and that free movement will continue for that long, as will cash payments to the EU. That’s when the headbangers move against her.

The calling of the election will not be thought of as a gamble. The state of the British Labour Party is obvious for all to see. But it may not be the foregone conclusion, the resounding mandate, that May hopes will dig a moat between her and the Conservative Party’s hardliners. After the second World War Winston Churchill called a general election that everyone assumed would be a victory parade. It didn’t quite turn out that way: the British electorate, hungry for change, turfed him out.

There are plenty of contemporary electoral surprises to ponder, not least the Brexit-referendum result itself. While the Labour Party under Jeremy Corbyn is a source of despair, the election will throw up all sorts of surprises. The pro-EU Liberal Democrats will do very well. The results will reveal, starkly, just how bitterly divided is the country. Theresa May will almost certainly get her mandate, but she could well lose the UK.