For the UK Brexit is an existential issue, for the European Union it is a matter of a few details 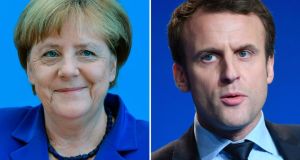 The significance of the election of French president Emmanuel Macron should not be underestimated. Photograph: Reuters/Eric Feferberg/Pool 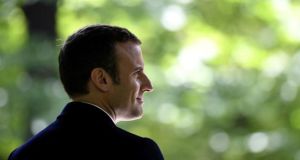 The significance of the election of French president Emmanuel Macron should not be underestimated. Photograph: Reuters/Eric Feferberg/Pool

One of the many implausible arguments used by pro-Brexit campaigners was the idea that Britain should leave in order to avoid the chaos that will ensue from the inevitable break-up of the EU.

Indeed, for a brief moment at least, it was possible to take all this slightly seriously. The potential for populist political takeovers in Holland, France, Germany and Italy loomed on the horizon.

The slow cancer of high unemployment and low economic growth looked too be a permanent state of affairs. Greece is always on the edge of some precipice or other. All of a sudden, none of this looks to be important, or at least quite as worrying, any more.

The significance of the election of the new French president, Emmanuel Macron, should not be underestimated. That France managed to avoid electing Marine Le Pen is to be celebrated but does not mean that both France and the EU can go back to sleep. Business as usual is simply not an option.

Macron has been very clear about what he wants to do. While scepticism is natural – French trade unions have already responded in traditional manner to his reform proposals – it is misplaced.

Without reform, booth France and the EU will continue to lurch from crisis to crisis: there is abundant evidence that this is widely recognised, not least by the new French president.

Macron is that politician the tabloids of any country – and their uneducated rich owners – love to hate: an unashamed globalist who likes nice restaurants; a philosophy graduate; a Schubert loving piano player; a writer of books full of ideas. Just for a second compare all that to Theresa May. Or Donald Trump.

For the EU to survive it has to be strengthened. Given the impending British general election it is hard to know just who will comprise the UK’s Brexit negotiating team but, whoever they are, they should take notice of the simple fact that the EU’s clear priority is now self-preservation.

That means doing a deal with the UK is important but isn’t the number one objective. Macron wants the EU to thrive and has some orthodox ideas about how to achieve this but with a distinctly French – dirisgiste -– flavour.

He is a free trader but his nod to populism is an acknowledgement that trade also has to be fair as well as free. In practical terms that means resurrecting, for example, the old “buy European” idea for public procurement programmes, particularly when other countries or regions do the same thing.

British firms currently supplying goods and services to European governments or other public sector bodies – should take note and be extremely nervous.

More generally, the negotiating aims of the EU are both simple and clear: any deal with the UK must not represent any kind of threat to the twin aims of preservation and strengthening of the EU’s institutional structure.

Macron and Angela Merkel are crystal clear about this – and it is looking increasingly likely that the German chancellor will win comfortably her own election later this summer.

A resurgent Franco-German partnership pursuing goals that will only suit the UK by coincidence is exactly the set-up that led successive generations of UK politicians to try and join the EU in the first place. Lack of influence was a problem back then and is going to be an even bigger issue going forward.

In a very real sense the EU is setting itself an agenda that prioritises lots of things above Brexit. Attention-seeking UK politicians may be surprised by the relative indifference they encounter in Brussels over the next few months. And this is as it should be. Brexit, by definition, is all-consuming for the UK but should not be that big a deal for the EU.

For the British, Brexit is an existential issue. For the rest of the EU it is now just a matter of a few details. Even potentially large ones such as the border on this island can be dealt with in a pragmatic way.

The only land border between the EU and the UK may well turn out to be slightly porous but it is hard, in purely practical terms, to see how massive quantities of smuggled goods will upset the European economic firmament.

It will be a bit like the way the European monetary authorities combat and tolerate a bit of currency counterfeiting: if every time we used money we had to check the origin of the notes and coins, economies would grind to a halt. So all sorts of measures are put in place, in the background, to make sure not too much counterfeit currency enters circulation: if the forgers were rampant we would see inflation, so we know those measure work.

But few of us are ever aware of the battle with the counterfeiters and no one looks at the euro notes in a questioning way. So it should be with the border: all sorts of noises can be made about zero tolerance towards smuggling, but background checks, technology and tolerance can combine to minimise any or even all disruption. Too much currency forgery would quickly be obvious: so would large scale cross border smuggling.

Viewing Brexit as just a set of details to be worked through will come as a shock to the British. But the EU is already stronger and able to look beyond Brexit.

1 Comcast acquires Irish cloud-based telco Blueface
2 Money matters: ‘My father embarrassed us with his haggling’
3 Pilita Clark: When a rude boss keeps you waiting, why not walk out?
4 Henderson Park seek €400m+ for prime Dublin office blocks
5 Five things to watch out for in Apple’s earnings
6 Opioid executive admits to ‘no morals’ ahead of prison term
7 Little strategic thinking in election manifestos of Fine Gael and Fianna Fáil
8 NI house builder apologises to Harry and Meghan over adverts
9 US threatens retaliation against EU over proposed carbon tax
10 Lack of trust blocks solutions to personal insolvency - ISI chief
Real news has value SUBSCRIBE