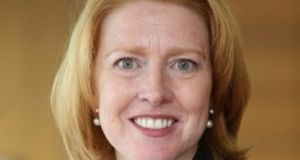 Azon partner Caroline Bruno: firms are gearing up for a war on talent

Nearly half of Irish financial firms fear they may lose employees to international companies relocating to Ireland in the wake of Brexit, according to a survey by recruitment firm Azon.

Instead of the traditional brain drain via emigration, the study suggests Brexit may result in greater competition in Ireland for skilled workers, which is also likely to push up salary levels.

Azon partner Caroline Bruno said domestic banks and other financial institutions were gearing up for a “war on talent”. She said firms were going to have to show their employees progression and opportunity if they wanted to retain them.

The survey of more than 500 senior financial executives also found that the most important priority for international executives considering a move to Ireland, after remuneration, was access to an airport.

It was considered more important than the availability of housing, which has been the focus of much debate, the cost of living and access to schools.

While the majority of respondents (72 per cent) believed Brexit would have a positive impact on financial services in Ireland with a significant inflow of jobs, most executives expected the benefits to be predominantly confined to Dublin.

An overwhelmingly majority (81 per cent) also felt the Government was not doing enough to maximise the potential dividend from Brexit.

So far, Dublin has attracted some big names in the post-Brexit scramble, including Barclays Bank, JP Morgan and, just yesterday, Standard Life said it was likely to choose the Irish capital as a base for its EU subsidiary after Britain leaves the bloc.

At the same time, Ireland has also lost out on potential business from US insurer AIG, which recently decided on Luxembourg for its EU base, and Lloyds of London which moved staff to Brussels.

She mooted the idea of creating a Brexit think tank, where senior executives could share their opinions on how best the State should respond to the challenge.