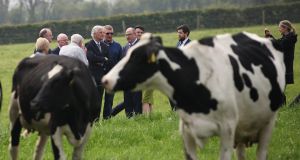 Minister for Foreign Affairs and Trade Charlie Flanagan and Michel Barnier, the EU’s chief Brexit negotiator, with farmer Brian Burgess on his cattle farm in Co Monaghan, near the border with Armagh. Photograph: Julien Behal

A prominent French farm leader has lobbed a proverbial grenade into the upcoming Brexit negotiations by calling for the re-establishment of a hard Border between Northern Ireland and the Republic after the UK leaves the EU.

Christophe Hillairet, a council member of Copa, Europe’s largest farm organisation, said he was afraid the UK would sign agreements to import food from Commonwealth countries once it exits the EU’s customs union.

He said the only way to stop these imports finding their way into the Republic and the wider EU was for strict border controls to be reintroduced.

“Ireland is a big problem but for the French farmer we will need to have a hard Border between the North and the Republic as otherwise we will have a lot of products that will cross from North to South. That would be very dangerous for our producers,” he told the Agra Europe website.

Mr Hillairet expressed fear that lamb from New Zealand could arrive in Northern Ireland and cross a “soft” Border into the Republic before entering the mainland EU markets.

“Those of us who remain must therefore work together to protect Europe. In that context, it is simply not possible to have a soft Brexit and still maintain the advantage which the EU has as a trading bloc,” he said, adding that the current debate on how to manage Brexit in relation to Northern Ireland and the Republic was troubling.

ICMSA president John Comer said Mr Hillairet must be aware of the very recent history of suffering and conflict in the Border region whose avoidance must continue to take precedence over the anxieties of French farm groups.

“The only people who would have enjoyed reading Monsieur Hillariet’s comments were the very anti-EU British eurosceptics who want to play the different member states off against each other and who want to foment that feeling of tension between different sectors and nations,” he said.

Maintaining a soft Border with the North is a key objective of the Irish Government.

The EU’s chief negotiator for Brexit Michel Barnier has promised to find a way of avoiding a hard Border amid fears its return could threaten the peace process and damage commerce on the island.

Newly elected French president Emmanuel Macron, an avowed europhile, is expected to take a hardline approach to Brexit, however.

Prior to being elected, he said in an interview that while it was not a question of punishing Britain, the UK could not be allowed to maximise its interests without taking into consideration the EU’s interests.