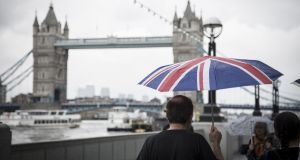 Sentiment among UK households dropped in July to match the weakest reading since just after the Brexit vote, led by a sharp drop in confidence in the economy.

The reading of minus 12 in GfK’s consumer-confidence index is down two points from the previous month.

Excluding the post-referendum dip in July 2016, the index hasn’t been this low since 2013. A gauge of how consumers see the economy progressing fell five points to minus 28, while their eagerness to make major purchases also waned.

With inflation outpacing wage growth, real incomes are falling as uncertainty over how the UK will leave the European Union further undermines sentiment.

The Office for National Statistics said this week that the economy experienced a “notable slowdown” in the first half of the year.

“All bets must now be on a further drift downwards in confidence,” said Joe Staton, head of market dynamics at GfK.

“Yes, employment is booming, but wages have fallen in real terms since 2008 once inflation is taken into account.”

He added that if Brexit negotiations “continue to deliver more questions than answers, it’s unlikely the overall index score will find any tailwinds for some time.”

Republic’s unemployment rate jumps to 16.5% 11:11
Kenmare resources suspends guidance on Covid-19 uncertainty 10:59
Flutter to ask shareholders to take dividend payment in shares 10:50
European stocks pare gains as investors consider economic reboot 10:35
After getting ahead in Covid testing, Berlin now hopes to get ahead in recovery 10:31