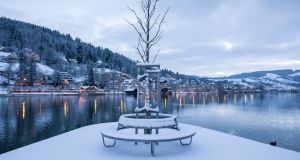 The vote on Switzerland’s planned reforms is scheduled for February 12th. Photograph: EPA

Switzerland, long an attractive location for corporations on the lookout for tax savings, is fighting to keep that standing.

Under pressure from abroad, it is doing away with a special benefit for multinationals and plans to tax everyone from globally active commodity traders to corner bakeries at the same rate. Unhappy with the proposals – which include a reduction in regional rates that could hit municipal budgets – opponents are now forcing a referendum on the issue.

Switzerland’s plan to scrap the sweetener is its latest attempt to appease foreign criticism after ending its tradition of banking secrecy. Yet the change, which has been years in the making, may not be enough to maintain the country’s allure, with the UK already lowering its corporate tax rate and US president-elect Donald Trump considering cutting the US levy by more than half.

“If you think a board in the US is influenced by the mountains in Switzerland or the rain in Dublin? No, it’s about maximising shareholder value,” said Dominic Morgan, global tax and transfer pricing director at Zug-based ESAB Europe, a manufacturer of welding and cutting equipment with plants on four continents. “The tax reform is good, but it’s safe. And people elsewhere are doing bold things.”

Switzerland’s proposals will mean a cut to cantons’ tax rates – imposed in addition to the federal levy – and give companies a break for research and development via so-called patent boxes. Together with additional measures, that’s meant to compensate for scrapping the special status for multinationals, which employ about 150,000 people in Switzerland and generate half the federal government’s revenue from taxes on profits.

The reform has backing of 51 per cent, though a significant proportion of respondents were still undecided, according to a gfs.bern poll. The vote is scheduled for February 12th.

Some opponents argue the move is too costly and hurts the middle class, though others say that, while necessary, it isn’t ambitious enough to safeguard Switzerland’s competitive advantage in the longer term in the context of, say, the Irish 12.5 per cent rate. Trump has proposed cutting the current US rate to 15 per cent from 35 per cent.

What is undisputed is there will be a shortfall in revenue. The city of Zurich fears a yearly gap of as much as 300 million francs (€280 million) and may raise taxes on individuals to compensate. In Geneva, home to almost 1,000 multinationals, the move will leave a projected 440 million-franc hole in its finances.

“Any other option is worse,” said Christian Stiefel, chief executive of SwissHoldings, the federation of Swiss-based multinational companies.

“In tax terms, we have to be a jurisdiction among the top three in Europe.”

The government argues the reform is needed to prevent rising joblessness and an exodus of companies that could lead to potential tax losses of more than five billion francs a year. Peter Uebelhart, head of tax at KPMG Switzerland, said the numbers at stake in the event of a “No” vote could be “in the billions”.

According to Ruedi Noser, a member of parliament from the pro-business Free Democrats, the risk is not whether companies will leave Switzerland because of the reform. “It’s who will come in the next 20 years,” he said. –(Bloomberg)