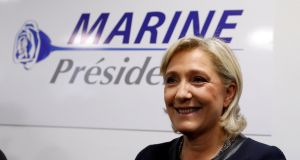 France is asking bond investors to take the long view in what is expected to be a challenging year for the euro zone’s second-largest economy, as the country braces for a bruising presidential election.

On Thursday, France will tap an existing 50-year bond that matures in 2066, in the latest sign that investors are still willing to prioritise higher yields amid low global interest rates, and in spite of a sharp uptick in market volatility ahead of France’s spring vote.

The spectre of rising populism in Europe has led investors to question whether France’s far-right, anti-euro candidate, Marine Le Pen, might echo Donald Trump’s surprise win in last year’s US election, adding to the litany of recent political upsets.

According to the latest polling data, Le Pen could win the initial round of voting, although she would then be beaten into second place in the run-off as moderate voters rally against her, according to these same polls. The favourite for the election is François Fillon of the centre-right Republicans.

“We have seen speculators and hedge funds using futures to take views on political uncertainties,” said Olivier De Larouziere, head of interest rates at French asset management company Natixis. “We have been cautious on French bonds for a while. It’s not just in France that bond yields are rising, but everyone is talking about France because of the political situation.”

However, Anthony Requin, chief executive of Agence France Trésor, which manages French government debt, said the chance of a Le Pen victory was not regarded as a “mainstream scenario” by the country’s financial sector.

Regardless of the political turbulence, demand from domestic and overseas investors, particularly in Japan, would support the country’s borrowing plans this year and its sale of ultra-long-dated debt, he said. “We are following advice from primary dealers. There is appetite.”

Until recently, ultra-long government bonds were a rarity. But central bank policies to reduce borrowing costs via bond-buying schemes have changed the playing field, pushing investors to buy increasingly longer-dated debt in search of higher yields.

Last year, euro zone countries raised €19 billion of debt with maturities of 40 years or more, up from just €1.3 billion the previous year. Ireland and Belgium, meanwhile, sold 100-year bonds at the behest of a small number of investors.

Requin says France was also approached to issue a 100-year bond, but declined on the grounds that demand did not appear sufficiently strong to warrant a new maturity.

Banks expect smaller sums of ultra-long-end debt issuance this year, with UBS strategist Nishay Patel pointing out that the historic low bond yields that drove the boom have already given way to a bond sell-off.

1 Majority of employees don’t want to return to pre-Covid working patterns
2 Homeworking is depriving me of juicy gossip
3 If tourists are such pariahs should we not be testing them on arrival?
4 The $6bn judgment pitting Nigeria against Irish businessmen
5 Tobacco giant’s menthol-ban substitutes take 5% share of Irish market
6 Primark rejects £30m bonus for bringing back staff
7 Investors in Irish solar energy fund in line for €20m payout
8 Norwegian airline sued in Dublin by inflight caterer
9 ‘My rent here is so low it’s a joke’
10 Varadkar and Donohoe to meet banks to discuss mortgage breaks
Real news has value SUBSCRIBE