The ECB is now in a position to ‘normalise’ monetary policy, economists say 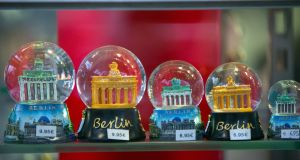 One economist calculates that if rates remain near zero this year, inflation will see German savers losing €36 billion. Photograph: Bloomberg

Inflation in the 19 countries sharing the euro increased by an annual 1.1 per cent last month, data showed on Wednesday, stirring a fear of inflation among Germans that goes back to the 1920s. The ECB aims for inflation of just under 2 per cent, but it has undershot its target for years. To fight off deflation, the central bank has cut interest rates to zero and pumped more than a trillion euros into the economy through a bond-buying programme.

“It is time for a normalisation [of monetary policy],” Stefan Bielmeier, the chief economist at DZ Bank, told the newspaper Bild. “Now a change in interest rates is doable.”

DIW institute chief Marcel Fratzscher told Bild: “The sooner the inflation rate in Europe reaches the goal of 2 per cent, the quicker the ECB can raise interest rates. Savers would also benefit from this.”

Isabel Schnabel, one of the panel of economists that advises chancellor Angela Merkel’s government, said an end to ultra-expansive monetary policy should come soon, Bild reported.

German consumer prices, harmonised to compare with other EU countries (HICP), rose by 1.7 per cent on the year in December, the highest in more than three years, up from 0.7 per cent in November, the Federal Statistics Office said on Tuesday. For 2017, German inflation is expected to jump to around 1.5 per cent from 0.4 per cent in the past year. The debate over policy began when the head of the Ifo Institute for Economic Research, Clemens Fuest, said on Tuesday the jump in German inflation was a signal for the ECB to end its expansive monetary policy and its bond purchases.

German newspaper editorials took up the issue, concentrating on the cost to savers of ultra-low interest rates.

With rates likely to remain near zero this year, German savers will lose an estimated €36 billion in 2017, DZ Bank economist Michael Stappel said. “Millions of savers are paying the bill now,” Bild commentator Jan Schaefer wrote. “Their savings are being de facto devalued while euro zone governments can keep taking on cheap new debt like never before. This redistribution at the expense of savers must have an end. That’s why interest rates finally have to go up.”

“The ECB cannot afford to lose its credibility – especially in Germany, ” Sueddeutsche commentator Marc Beise wrote, pointing to the rise of populist sentiment in Europe and Britain’s vote to leave the EU.

“Whoever sits in Frankfurt at the ECB headquarters, with a European vision and closes his eyes to the anger of more and more people in the country where he works, will in the end put at risk the whole European project.”