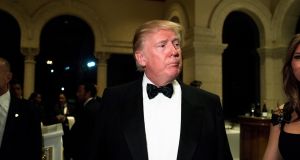 Donald Trump: Policymakers at the Federal Reserve said it was too soon to jump to firm conclusions about what the president-elect’s fiscal policy would actually look like. Photograph: Hilary Swift/The New York Times

Many officials of the US Federal Reserve said the central bank could be forced to lift rates higher than expected if Congress passes economy-boosting tax cuts in 2017, according to minutes of the Fed’s final policy meeting of 2016.

Almost all Fed officials meeting on December 13th-14th said the risks of growth surpassing their forecasts had grown because of the possibility of more “expansionary” fiscal policy under president-elect Donald Trump and the Republican-controlled Congress.

However, policymakers also stressed that it was too soon to jump to firm conclusions about what fiscal policy would actually look like.

“Participants agreed that it was too early to know what changes in these policies would be implemented and how such changes might affect the economic outlook,” the minutes to the meeting said.

The Fed on December 14th raised short-term rates for only the second time in a decade and predicted a quicker speed of tightening this year compared with the one-a-year pace in 2015 and 2016.

Speaking after the meeting, Fed chair Janet Yellen said it was existing in a “cloud of uncertainty” as it weighs the possibility of tax and spending changes under the new Congress and administration.

Minutes of the meeting, revealed on Wednesday, show just how unclear the path of monetary policy now is given Fed officials do not know what details will emerge from negotiations in Congress over the coming months. The possibility of a further surge in the dollar also re-emerged as an important risk factor.

“Many participants emphasised that the greater uncertainty about these policies made it more challenging to communicate to the public about the likely path of the federal funds rate,” the minutes said.

The staff at the Federal Reserve Board, whose forecasts informed the meeting, said they were already plugging in slightly higher gross domestic product growth forecasts because they expected tax and spending policy to be more supportive than in recent years.

Some attendees said business contacts were also beginning to factor in a more supportive fiscal outlook, as some companies predicted they would benefit from possible changes in federal spending, tax and regulatory policies.

Other firms were less optimistic. Though financial markets had taken a positive turn because of expectations of fiscal stimulus, “many participants expressed the need for caution in evaluating the implications,” the minutes noted.

While there were “upside risks” from possible budgetary expansion, there were also risks of unexpected setbacks stemming from the possibility of additional gains by the dollar, financial vulnerabilities in foreign economies, and the fact that official rates remain relatively close to zero.

Discussing policymakers’ forecasts, the minutes said: “Many participants noted that there was currently substantial uncertainty about the size, composition, and timing of prospective fiscal policy changes, but they also commented that a more expansionary fiscal policy might raise aggregate demand above sustainable levels, potentially necessitating a somewhat tighter monetary policy than currently anticipated.”