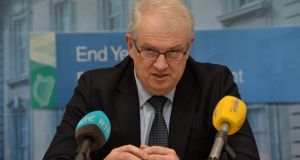 Department of Finance official John Palmer at the announcement of the exchequer returns for 2016 on Wednesday. Photograph: Alan Betson 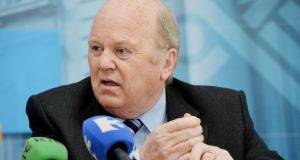 The deficit is well below the €1.445 million shortfall Minister for Finance Michael Noonan was targeting when he unveiled the 2017 budget in October.

The overall deficit widened to just over €1 billion for the year from €64 million for 2015 as the amount of bank bailout funding being repaid declined, the department said.

Total tax receipts rose 5 per cent last year to a record €47.86 billion, coming in 1.4 per cent ahead of what the Department of Finance had forecast earlier in the year. However, the figure was below a €48.1 billion projection made on the date of the 2017 budget in October, largely owing to “disappointing” corporate tax returns at the end of the year, according to the department’s principal officer, John Palmer.

While company tax receipts rose 7 per cent to €7.35 billion during 2016, they fell 43 per cent to €289 million in December on the same month last year, largely owing to a €150 million tax repayment being made to a single, unidentified company.

Meanwhile, a €2 billion contribution to the EU budget last year was below what the department had been expecting in October, while dividends from State-owned companies, including €258.7 million from ESB and €151 million from Ervia, were higher than anticipated.

The positive exchequer returns came on a day when the National Treasury Management Agency managed to sell a €4 billion, 20-year bond to cover more than 40 per cent of its minimum full-year funding plans and as the Central Statistics Office revealed that the Republic’s unemployment rate fell to 7.2 per cent in December, the lowest level since August 2008.

Broken down, income tax receipts, by far the biggest contributor to the State’s coffers, rose by 4.4 per cent last year to €19.2 billion.

While VAT income advanced by 4 per cent to €12.4 billion, it fell 3.4 per cent shy of a forecast set earlier in the year. However, Mr Palmer said the Revenue Commissioners had indicated gross receipts rose 8 per cent during the year, but that “significant” repayments had been made, particularly to pharmaceutical and IT companies that had made capital investments.

Capital-gains tax rose by almost 23 per cent last year to €822 million to come in 39.4 per cent above profile.

The social-protection bill came in 1 per cent higher than forecast, at €19.8 billion, purely down to a Government decision in the latter part of the year to return to paying a Christmas bonus to social welfare recipients. The payment had been abolished in 2009.

The State’s debt interest bill fell by 3.6 per cent over the course of 2016 to €6.74 billion, “reflecting the favourable interest rate environment evident throughout the year,” the Department of Finance said.

The Government raised about €8.5 billion in the debt market, taking advantage of record-low interest rates, where the yield on its benchmark 10-year bonds fell to a record low of just under 0.32 per cent, though it has since risen to 0.89 per cent, albeit well off a high of 14.2 per cent seen at the height of the financial crisis in 2011.

Meanwhile, a spokesman for the Department of Finance said the Government was committed to recovering, and holding in escrow, tax it has been ordered by the European Commission to collect from US technology giant Apple. Both Ireland and Apple are appealing an EU decision made in August that Apple owes the State €13 billion in back tax.

While the payment was originally meant to be put into an escrow account on Tuesday, the spokesman said Ireland was working with the commission and Apple on the final details of that matter.

“The commission are satisfied with our progress,” he said.

It is understood the payment will be made soon, as the Revenue Commissioners must align the logic of the EU’s calculations with Irish tax law. The amount paid into escrow, therefore, may be slightly different to the €13 billion outlined by Brussels.