US jobless claims fall to near 43-year low 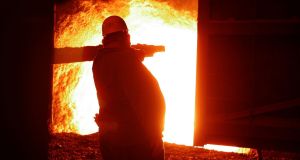 The US labour market is considered to be at or near full employment, with the jobless rate at a nine-year low of 4.6%

The number of Americans filing for unemployment benefits fell to near a 43-year low last week, pointing to further tightening of the labour market.

Initial claims for state unemployment benefits dropped 28,000 to a seasonally adjusted 235,000 for the week ended December 31st, the US department of labour said on Thursday.

That was close to the 233,000 touched in mid-November, which was the lowest level since November 1973.

Claims for the prior week were revised to show 2,000 fewer applications received than previously reported. However with claims data for six states and one territory estimated because of the New Year’s holiday, last week’s drop likely exaggerates the labour market’s strength.

The four-week moving average of claims, considered a better measure of labour market trends as it irons out week-to-week volatility, fell 5,750 to 256,750 last week.

In a second report, payrolls processor ADP said private employers added 153,000 jobs in December after increasing their payrolls by 215,000 in November. The ADP national employment report is jointly developed with Moody’s Analytics.

Prices for US Treasuries were trading higher after the data, while US stock futures were weaker. The dollar fell against a basket of currencies.

The US labour market is considered to be at or near full employment, with the jobless rate at a nine-year low of 4.6 per cent.

Tightening labour market conditions and gradually firming inflation allowed the Federal Reserve to raise its benchmark overnight interest rate last month by 25 basis points to a range of 0.50 per cent to 0.75 per cent.

While the US central bank recently forecast three rate hikes for 2017, minutes of the policy meeting released on Wednesday suggested the pace of increases would largely be determined by the labour market and fiscal policy.

Economists polled by Reuters had forecast first-time applications for jobless benefits falling to 260,000 in the latest week. Claims briefly pushed higher last month and in November, but economists blamed the gyrations on difficulties adjusting the data around moving holidays.

A labour department analyst said there were no special factors influencing last week’s data. That data has no bearing on December’s employment report, which is scheduled for release on Friday, as it falls outside the survey period.

According to a Reuters survey of economists, non-farm payrolls likely increased by 178,000 jobs in December after the same gain in November.

In a third report, global outplacement consultancy Challenger, Gray & Christmas said US-based employers announced plans to cut 33,627 jobs from payrolls last month, up 25 percent from November. Still, that was below the monthly average of 43,910 job cuts for 2016.

Layoffs last month were led by the defence, automotive, energy, transportation and government sectors. Employers announced 526,915 layoffs last year, down 12 per cent from 2015.