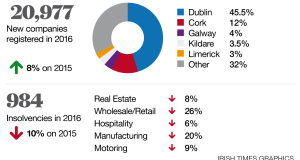 More than 20,000 new company start-ups were established in the Republic last year, the highest number in almost two decades.

New figures provided by business and credit risk analyst Vision-net show 20,977 start-ups were officially registered in 2016, a rise of 8 per cent on the previous year.

This marks the first time that start-ups have surpassed 20,000 in a single year since 1998, when 21,144 companies were established. It is also the second highest number recorded for 36 years.

Professional services was the most popular industry for new company start-ups overall with 4,079 established last year, an increase of 5 per cent on the 3,891 in 2015.

The second most popular industry for new start-ups was finance, followed by wholesale and retail, which accounted for 2,204 new start-ups.

Most sectors saw a fall in insolvencies, with wholesale and retail leading the way with a 26 per cent drop.

However, she said the 2016 figures “clearly demonstrate Ireland’s economic resurgence”.

“Our economy is more open to lending and risk-taking, and our businesses are eager to expand and undertake new projects,” she said.

“Our economy is also diversifying. Ireland’s professional services sector, along with our finance, construction, tech, manufacturing and hospitality sectors, are buoyant.”