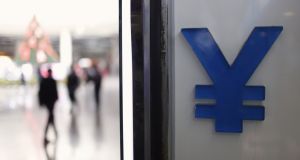 China has been burning through its foreign exchange reserves in a bid to curb the pace of the renminbi’s decline. Photograph: Reuters

China’s renminbi has made its biggest-ever two-day gain as strong data and tight liquidity in offshore markets caught out China bears and pushed the dollar lower around the world.

The offshore renminbi rallied as much as 2.6 per cent against the dollar to Rmb6.7853 (93.9 cent) for its strongest level since early November. As recently as Tuesday the renminbi was at a record low of Rmb6.9895.

The renminbi move weakened the dollar against other leading currencies including a three-week low against the yen at Y115.6.

“China helps the dollar retreat,” said Hans Redeker, strategist at Morgan Stanley, who noted there were large gains too for emerging market currencies including the Brazilian real and the South African rand. He added: “However, the biggest move compared to recent volatility has been experienced in renminbi markets.”

Bets on renminbi weakness had risen in recent weeks as the currency slid steadily last month to near the notable Rmb 7 level against the dollar.

China has been burning through its foreign exchange reserves in a bid to curb the pace of the renminbi’s decline - which was widely expected to increase this month when Chinese citizens’ annual $50,000 (€47,636) foreign exchange limit was reset.

Traders said a combination of strong service sector data and reports of further curbs on capital outflows by Beijing earlier this week had sapped the bearish mood while the surprise rally was exacerbated by falling liquidity in the offshore renminbi market.

Renminbi-denominated deposits held in Hong Kong - by far the biggest renminbi centre offshore - fell 5 per cent to Rmb627.6 billion in November to stand more than a quarter lower than their levels a year earlier.

“Renminbi weakness has been the most consensus trade to start the year - and with good reason - but liquidity in this market keeps getting lower and that just makes it more vulnerable,” said Mansoor Mohi-uddin, strategist at RBS. “I don’t think the underlying weaker trend has changed, but these moves will have made people betting on that thinking about one-way risk.”

Total assets in offshore renminbi fell 17 per cent globally last year to Rmb2.16 trillion, according to analysts at Standard Chartered, with the sharpest decline in deposits, down 22 per cent to Rmb1.17 trillion.

The offshore renminbi market was introduced in 2010 as part of China’s efforts to internationalise its currency while maintaining a tight grip on its onshore markets. The offshore rate in theory trades freely while the onshore rate is limited to moves 2 per cent either side of a centrally fixed midpoint.

Deposits outside the mainland initially built up rapidly as the renminbi strengthened. They peaked however at Rmb1 trillion in late 2014 shortly after the currency’s own high point.

The decline in offshore liquidity has limited investor appetite to short the renminbi by raising the costs of doing so. On Thursday the cost of borrowing renminbi overnight in Hong Kong more than doubled to hit its highest level in a year at 38.35 per cent compared with its normal levels between 1 and 2 per cent.