State’s ‘rainy day fund’ is set up with initial €1.5bn 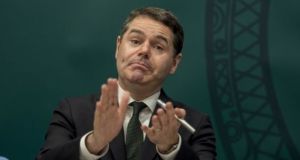 The State’s rainy day fund, which is intended to help offset future shocks to the economy and strengthen the public finances, has been formally established.

The National Treasury Management Agency (NTMA) has been instructed to transfer €1.5 billion to seed the new fund. Initial financing will come from the Ireland Strategic Investment Fund (ISIF), an €8 billion fund that operates under the umbrella of the NTMA.

Minister for Finance Pascal Donohoe announced the fund as part of Budget 2019. It was due to be supplemented with an additional €500 million from this year’s budget although the Government decided against this, arguing it made no sense to do so with Brexit on the horizon.

Speaking on Thursday, Mr Donohoe said the Government may turn to the fund in the event of a no-deal Brexit.

“In the event that the economic impact of a disorderly Brexit is larger than assumed then the funds transferred to the rainy day fund can be deployed to mitigate the impact of Brexit,” he said.

The act establishing the fund does not set out specific events that would lead to its drawdown, although if the Government opts to draw down from it, Mr Donohoe must seek a resolution of Dáil Éireann authorising it.

The fund is intended to be used as a defined-purpose instrument to address severe, unanticipated events, as opposed to the normal fluctuations within the economic cycle. This approach aligns it with EU fiscal rules.

There was mixed reaction to the new fund when it was announced last year. Although it was largely seen as something that could serve as an important fiscal buffer, some critics described it as a missed opportunity to help solve the housing crisis.