Relationship with UK post-Brexit must be repaired, says Institute of Directors 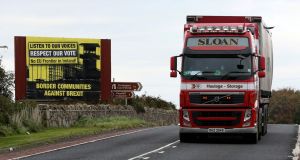 Trading and administration issues when dealing with the UK market were identified as the top concerns. Photograph: Getty Images

The Republic needs to “actively address” how it will improve its relationship with the UK after Brexit, nine in 10 business directors and executives say.

“The longer-term implications of a negative relationship could have consequences for future trade and business between the two countries,” said Maura Quinn, chief executive of IoD Ireland.

“Over the three consecutive quarters this year our surveys have found increasing negative sentiment among business leaders in relation to the impact of Brexit on the Irish economy.”

Only a fifth of respondents anticipate opportunities for growth in the UK in 2020, with the domestic market, the EU and the US all seen as having stronger potential for growth.

Trading and administration issues when dealing with the UK market were identified as the top concerns, followed by the impact on turnover and the impact on long-term strategy.

The survey of 280 directors and executives also found 55 per cent believe Brexit will be negative for the Irish economy in the long term, a proportion that has softened slightly in recent months.

Six in 10 respondents said they were more pessimistic than they were in the second quarter of 2019, with just 9 per cent claiming to be more optimistic.

“Business confidence is in danger of flatlining,” Ms Quinn said. “We welcome the Government’s efforts through the Getting Ireland Brexit Ready campaign, and other initiatives, but more needs be done to reverse this trend in negative sentiment.”