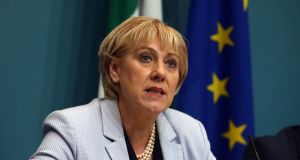 Minister for Business, Enterprise and Innovation, Heather Humphreys: “Our country has made huge strides since the recession.”

Small and medium-sized enterprises (SMEs) in Ireland are less innovative, less productive and less export-orientated than their foreign-owned counterparts, a study by the Organisation for Economic Co-operation and Development (OECD) has revealed.

The OECD’s review of SME policy and entrepreneurship in Ireland was commissioned by the Government to form the basis of a new strategy aimed at closing the productivity gap between indigenous enterprises and multinationals.

The report said that while Ireland has been successful in generating “high-growth” companies, key drivers of employment and innovation, the SME sector, which employs more than 70 per cent of the State’s 2.3 million workforce, faces a number of challenges.

Productivity growth among established Irish SMEs, it said, had either flatlined or declined in the past decade for a variety of reasons, including poor skills development, a slower pace of digitisation and/or a lack of “internationalisation”.

It also found that the share of Irish SMEs performing in-house research and development (R&D) was low by international standards, as was the share of the SME turnover derived from innovation.

A major problem was the slow rate of digitisation, the report said, while also noting that firms here were less likely to be involved in innovative collaborations with external partners.

Accessing the Government’s R&D tax credits was highlighted as cumbersome and time consuming and therefore take-up was skewed in favour of larger enterprises despite the potential benefits, the report said.

Another key theme was the low level of export-orientated firms, with only 6 per cent of Irish SMEs directly trading across borders. Of those that did, a high percentage exported only to the UK market, highlighting the threat posed by Brexit.

Enterprise Ireland figures show that the UK market accounts for a third (€7.9 billion) of all SME exports.

The Paris-based think tank recommended the Government draft a single national strategy for SME and entrepreneurship, setting out its aims, which should target a 50 per cent increase in the number of SMEs exporting.

A new interdepartmental consultative group, chaired by Minister for State for Trade Pat Breen, has been set up to drive the recommendations.

Publishing the report, Minister for Business, Enterprise, and Innovation Heather Humphreys promised a major overhaul of the Government ’s SME policy, insisting the OECD’s report “would not be left on the shelf”.

“Our country has made huge strides since the recession. Through resilience, talent, and determination, we overcame enormous challenges,” she said.

“Nevertheless, with global challenges facing us, there is no room for complacency. Every generation needs to shake up its enterprise and jobs model, otherwise it falls backwards,” Ms Humphreys said.