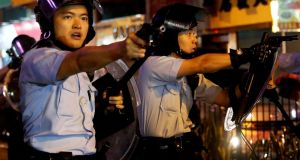 Economic gloom comes against a backdrop of violent anti-government protests in Hong Kong.

Hong Kong’s economy has plunged into recession after months of political turbulence in the Asia financial hub with some economists predicting the downturn will worsen in 2020.

Preliminary data released by the government on Thursday showed that the economy shrank by 3.2 per cent in the three months to September, a figure far greater than the 0.6 per cent contraction forecast by economists in a Bloomberg poll.

The figures come after the economy shrunk 0.5 per cent in the second quarter of this year, sending the territory into a recession for the first time since the global financial crisis.

Economic gloom comes against a backdrop of violent anti-government protests. The protests have seen millions of people take to the streets since June, hammering revenues in the tourism and retail industries and prompting a credit downgrade from two big rating agencies. Hong Kong, an international business and export centre, is also being buffeted by the US-China trade war and a slowing global economy.

“What’s happening in Hong Kong now is unprecedented,” Carrie Lam, the city’s leader, told business leaders on Thursday. It is an “inevitability the economy will be hard hit”.

Iris Pang, an economist at ING, an investment bank, forecast that the economy would shrink in all four quarters next year.

The demonstrations in Hong Kong began in opposition to a now withdrawn law that could have seen criminal suspects extradited to mainland China, but have since evolved into a broader challenge of Beijing’s rule over the former British colony.

Authorities’ enforcement of a ban on wearing masks at public gatherings, introduced in October, could face its steepest challenge yet on Thursday.

Instead of the customary skeleton costumes, protesters plan to mark Halloween by donning masks of Ms Lam and Chinese President Xi Jinping and marching through the city’s financial district to Lan Kwai Fong, a nightlife area known for its raucous Halloween parties.

Riot police are expected to be out in force. Hong Kong’s metro service will close early, while a popular theme park has cancelled Halloween festivities entirely.

The Hong Kong government has begun rolling out measures to stimulate the economy. These include tax cuts and boosts to social security, as well as relaxing mortgage rules for first-time buyers. But the administration, which holds a war chest of HK$1.1tn (€126 billion) in fiscal reserves, has refrained from widescale stimulus.

The Hong Kong Monetary Authority, the city’s de facto central bank, on Thursday followed the US Federal Reserve in lowering its benchmark interest rate. HSBC and Standard Chartered, both big banking presences in the city, have also lowered lending rates.

But “interest rates don’t matter for this economy any more”, said Ms Pang, the economist. “When there’s violence in the streets, people don’t want to go out shopping or go out for dinner.” – Copyright The Financial Times Limited 2019

1 Basic income for all: Has the Covid crisis given us a new economic model?
2 Only way is up for Stripe as valuation skyrockets
3 Promontoria barred from pursuing doctor over Ulster Bank loan
4 Electricity capacity predicted to rise 40% with emissions halved by 2030
5 Brexit stumbling blocks persist as Barnier travels to London
6 ‘I don’t need to do any of this. . .I don’t actually need to work.’
7 ‘Make plans but don’t hold on to them too seriously’
8 Online shoppers face unwelcome tax surprise
9 How long can Government afford to keep State pension age at 66?
10 Direct sea routes to Europe offer certainty in choppy Brexit waters
Real news has value SUBSCRIBE