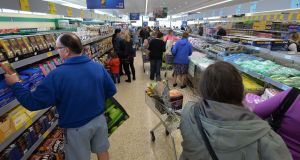 The decision to increase the so-called living wage will boost wages at companies such as Aldi, Lidl and Ikea, which have signed up to the living wage campaign. Photograph: Alan Betson

Thousands of Irish workers are in line for a pay rise following a decision to increase the so-called living wage, which is paid voluntarily by certain employers.

The non-statutory pay rate, which is set by the living wage technical group, has been increased by 20 cent to €11.90 an hour to reflect the rising cost of rental accommodation in Dublin and other urban areas.

The move will boost wages at companies such as Aldi, Lidl and Ikea, which have signed up to the campaign.

The technical group, which is made up of researchers and academics under the auspices of the Vincentian Partnership for Social Justice, sets the rate according to what it considers a worker needs to cover basic cost of living expenses.

The overall cost of a socially acceptable minimum standard of living increased by an average of 2 per cent for a single person, without dependants, in 2017

The group said that the cost of food, clothing, health insurance and transport all fell in 2018, while changes to the Universal Social Charge also boosted wages.

However, these savings were wiped out by rising rents, it said, meaning the overall cost of a socially acceptable minimum standard of living increased by an average of 2 per cent for a single person, without dependants, in 2017.

In Dublin, where the housing crisis is most acute, rent now accounts for effectively half (49.6 per cent) of a single person’s minimum living costs, and increased by more than €21 per week since 2017, the group said.

Rents have continued to increase outside of Dublin also with housing costs for a living wage worker rising by an average of 10.9 per cent across Ireland, it said.

“If housing costs had not increased to such a degree the living wage rate would not have increased in 2018,” it said.

The latest increase, which amounts to roughly €8 a week, means the living wage is now almost a third higher than the legally required minimum wage, which is set at €9.55 an hour.

The living wage campaign was established here in 2014, and its recommended pay rate is updated in July of each year.

It is part of a growing international campaign to establish an evidence-based hourly income that a full-time worker needs to meet the cost of housing, utilities, transport, healthcare, clothing and food.

It differs from the legally required minimum wage which is set by law, and which campaigners claim often fails to meet basic standard-of-living requirements, leaving recipients reliant on welfare for additional income.

The technical group describes the living wage as an income floor, “representing a figure which allows employees to afford the essentials of life”.

“Earnings below the living wage suggest employees are forced to do without certain essentials so they can make ends meet,” it said.

In 2015, Lidl became the first Irish supermarket chain to sign up to the living wage campaign.