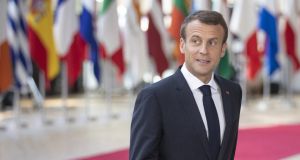 It has taken a long period of adjustment to 2018 before this deficit finally fell back to reach its 2007 level.

Along the way, the individual deficits in Ireland, Greece, Spain and Portugal raised serious concerns about the solvency of those states. To deal with the crisis, those countries had no choice but to put in place exceptionally severe adjustment programmes.

However, most of the rest of the euro area, such as France, Germany and the Netherlands, faced no such worries about solvency. While their public finances had deteriorated, they still had room to manoeuvre to stimulate their economies, if they had so wished. And the wider euro area would have benefited from such a stimulus.

A basic lesson taught to economics students is that a state should operate what is called a counter-cyclical fiscal policy. When the economy is approaching capacity through high growth, the government should cool things down by raising taxes and cutting expenditure.

However, when the economy is suffering a major recession, the government should pump money into the economy, provided it can do so without going bust.

A joint Central Bank of Ireland/IMF conference in Dublin this week considered the lessons from the first 20 years of the euro. One of the papers highlighted the fact that, taken together, the euro area economies imposed a serious tightening of fiscal policy over the period 2010 to 2014.

This was a very strongly pro-cyclical policy, exacerbating underlying trends. In other words, when it was suffering a recession of historic proportions, the fiscal policy of the euro area made things worse.

Former IMF chief economist Olivier Blanchard told the conference that those countries, like Germany, which had the capacity to stimulate their economies in the crisis years, should have done so.

Instead, they did the opposite. The consequence was an unnecessarily severe recession in the euro area that affected all members, but was particularly harsh in the heavily-indebted countries like Ireland and Greece.

However, not all euro area countries draw the same lesson from the recession. Germany and the Netherlands continue to believe that the need to reduce debt trumps the need to moderate recessions. The existing euro-area rules governing the public finances reflect this viewpoint.

Other euro area members take a different, more Keynesian economic view that fiscal policy should “lean against the wind”. However, while these countries recognise the inadequacy of the fiscal response to the crisis, they do not share a common view on how to address the problem.

The French government have proposed that there should be a euro budget that can be used to stimulate the economy in bad times, while building up a surplus in good times. This idea has not found favour with Germany and the Netherlands.

Ireland is part of a new alignment of EU member states dubbed the ‘Hanseatic League’, that includes the Netherlands, the Baltic republics and Scandinavia, and this grouping has also expressed reservations on the French proposal.

The French minister for finance this week noted that “some like Ireland and Luxembourg have expressed an interest in a budget and have reservations regarding fiscal convergence”.

Instead, what is needed is a mechanism to co-ordinate national budgets. The countries that had fiscal space during the crisis should have been obliged to stimulate their own economies between 2010 and 2014. They should have cut taxes for their own citizens. The spill-over effects would have benefited us all.

Such an approach, using co-ordinated national budgets, would also mean that there would be no transfers from one country to another, something the Netherlands and Germany, not unreasonably, find so objectionable.

The Macron government is on the right track. It is just that their solution would be too small to be worthwhile. It also, unnecessarily, raises the possibility of transfers from one country to another outside the context of the standard EU structural funds process. Unfortunately, we have a long way to go before we see a suitable reform of the current approach to Euro area fiscal policy.