Cliff Taylor: Another overrun in health spending a sign of challenges for ministers 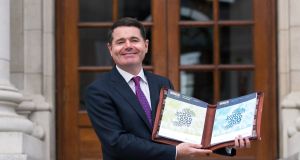 Minister for Finance Paschal Donohoe: big issue is not whether taxpayers get an extra €7 or €10 a week, but about hospital waiting lists and housing. Photograph: Cyril Byrne

The bad times during the crisis were a tough period to be minister for finance and Fianna Fáil suffered at the polls after all the cuts and tax hikes. But while back then the only question was where to wield the knife, the better times bring their political difficulties, too.

Now there is cash available and there will be some scramble in the next few months about what to do with it on budget day in October. As the current confidence and supply agreement runs out after this budget, a lot of political shaping lies ahead.

There are opportunities here for Minister for Finance Paschal Donohoe, as for the first time in years he will have some reasonable leeway on budget day. But the awkward bit politically is that expectations are rising with the recovering economy – and delivery of real improvements is tricky and takes time. Nowhere is this clearer than in health, where spending is yet again running ahead of target, just as the Government is considering how to implement a new multiyear plan, which would require more cash again.

The mid-year exchequer returns brought one piece of good news. Tax revenues were a bit behind in some key areas in the early months of the year, but most are now on track, including the key income tax heading. There is no reason why the tax targets for 2018 should not be met.

This will open up budget leeway for 2019, albeit that Brexit uncertainty may well cast a cloud. And remember that €260 million has already been allocated to additional spending, with more to come. What could possibly go wrong?

Well dig a little deeper into the figures and the challenges become clear. Most of the political debate in the run-up to the budget will be about improving services and increasing investment, rather than cutting taxes. And managing the spending side of the budget to deliver real improvements is not easy, as the latest figures show.

Spending was kept tight, by necessity, as we emerged from the economic crash, as we were constrained by EU rules. Now it is on the rise again, with total spending up 8.5 per cent year on year, or 0.5 per cent ahead of target. Day-to-day spending was up 6.7 per cent in net terms in the first half of the year. The main pressure is in health, up 8.7 per cent on 2017 and 2.3 per cent, or €167 million, ahead of expectations.

Were it not for two other factors, the health overrun would have led to a bigger general overspend. One was that timing factors meant there was underspending at the Department of Agriculture. The other was that State investment spending , while more than one-third up on last year’s level, was €176 million or 8.2 per cent below expectations.

Delivering on real improvements in the health service and on capital spending – particularly in areas like housing and transport – will be the key economic challenges for whatever administration is in power over the next few years. The exchequer returns underline the extent of these challenges, particularly in health where a new Sláintecare programme, to which the Government has committed, would involve more resources in the years ahead.

Despite the imminent establishment of a taskforce attached to the Department of Health to take on the implementation of Sláintecare, it remains to be seen if this Government is really committed to the strategy. Meanwhile, after the announcement of its glossy new State investment programme in February, the hard slog of implementation has yet to gather pace. The wars over GAA pitches and people’s front gardens are just a foretaste of what is to come.

By its nature, investment spending takes some years to increase, and improvements in the health service – if they can be achieved – are also a long-term challenge. Many other countries, notably the UK, are going through exactly the same debate about what resources the health service needs and how best to deploy them.

Whatever the Minister does, he has to bear in mind that now is the best of times for the exchequer, with soaring growth and falling unemployment. He may have to deliver the budget with huge uncertainty remaining about Brexit, as well as the certainty that growth rates will slow from their current level at some stage. Despite strong growth and tax revenues, the exchequer was still in deficit to the tune of €823 million in the first half of the year, up by more than €300 million on the underlying picture in the same period last year. Spending rose more quickly than revenue. This means the exchequer is still in deficit, despite the strong surge in corporate tax receipts, which may or may not prove sustainable.

The big political issues are not about whether taxpayers get an extra €7 or €10 a week, but rather about hospital waiting lists and the housing crisis. It is about controlling spending and being set to get value for money. These are all complicated political jobs with a long lead time to delivery. Come budget day, the Minister will have to sell the sizzle rather than the sausage. Add in the uncertainty caused by Brexit and, despite the strong exchequer trends, this will be a tricky budget.